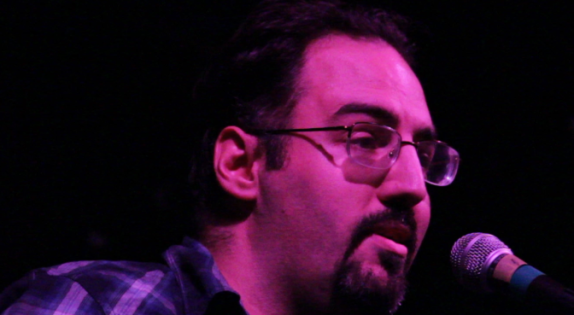 John has been making a fool of himself on the page and the stage from a fairly young age. He grew up loving theatre, so when he isn’t performing, you will probably find him near the stage with camera in hand, soaking up the amazing and diverse stories that come from the Melbourne Spoken Word community. His written and visual creative work centres around ideas of hope, dignity and wonder. He has spoken at TEDx St Kilda and is a regular attendee at Slamalamadingdong and Voices in the Attic and any other event he can get along to. One of these days, he will finish procrastinating and publish a book, or go out and “get a real job”. But til then, this is John. 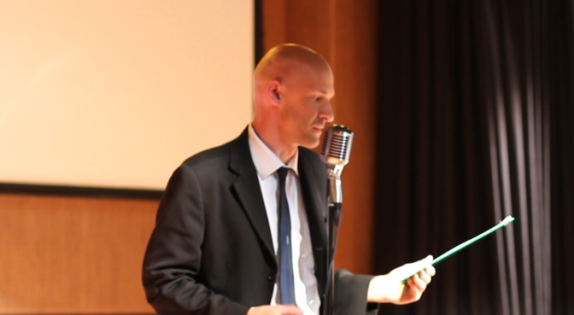 Brendan Bonsack, for his poem ‘A Rough Guide,’ was awarded one of the honourable mentions from The 2015 Melbourne Spoken Word Prize. Performed at Library at the Dock, Docklands on December 4, 2015.

Video produced by Melbourne Spoken Word. Thanks to Jez Speelman for filming.

About Brendan Bonsack Brendan Bonsack is an Australian poet and songwriter. His written work appears in print and online, and has been featured in Australian and European festivals. He has published six books of poetry, including a collaborative volume with writers from the USA. His original songs have been released over some ten albums and may be heard in cafes and bars dotted around his home city of Melbourne. His poetry and music is available at www.brendanbonsack.com. 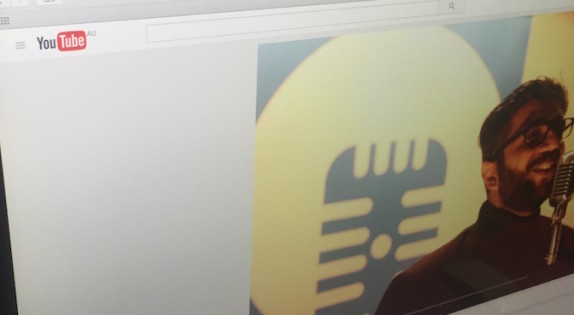 From radio to podcasts, to spoken word and performance poetry in video form, specifically YouTube. Radio and podcasts focus on the words and sound of the voice, where as videos of people performing poetry add that performative element and seems like a more total translation of a live performance. Many channels have managed to reach millions with posting regular videos of a wide range of poets.

We look at a few local channels and a few big ones overseas.

We of course have the Melbourne Spoken Word YouTube channel. Started a few years ago with Bill Moran and Emily Weitzman visiting, with the help of Freeman Trebilcock in particular we’ve expanded to grow a channel of regular videos, from our own events as well as recording other gigs around Melbourne and hope to expand upon that in 2016.

The other key Melbourne-based channel is RealPoetryMovies, produced by Ken Smeaton. Ken publishes videos each week from poetry gigs around Melbourne, and they’re known for including the text on the screen with a poem.

Before YouTube, Melbourne had Red Lobster. A regular program on community television channel, Channel 31, produced by David McLauchlan and others. It ran up until 2012, and there’s an archive of all 275 episodes online, which is great to see poetry from past gigs and some poets looking a little more youthful than they do now.

Chamber Poets, a gig in Woodend run by Myron Lysenko, has a channel of videos from their gig as well, with videos of both features and open micers online. Other projects, such as the Common Ground interfaith spoken word program have their own playlist as part of Multicultural Arts Victoria with videos.

Beyond Melbourne, Bankstown Poetry Slam in Sydney has a regular channel of live poetry performances from their gigs and the Australian Poetry Slam has videos from the National and NSW finals.

Beyond Australia, the number one channel that most people have heard of is Button Poetry, featuring vid 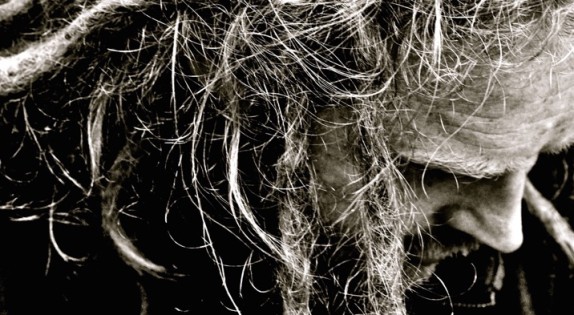 The Myth of Creative Success

This year we become a family of four. A little fire. A melody. A wifey. And me. That is four heads to shelter, four bodies to clothe, four mouths to feed and forty toes to keep warm. And its all on my pay-cheque. The glorious income of a poet. Now that is one daunting reality.

A full time poet. This is what I have prided myself on being the last few years. And yet now, this year, I take on another job to feed the four hungry mouths. So no longer am I technically a full-time poet. My ego bucks at this. Wants to be recognised. Admired. Wants the myth of success.

The notion of the full-time creative in any field is one that is strived for. There is a myth that once you are a full time poet/musician/writer/dancer/whatever then you have truly made it. When your art pays for your life then you have reached artistic Nirvana. The top of your game. Success.

I think its time we called this one for what it is…BULLS%#T.

The full-time artist life is a lot less romantic than the myth of said life. Most weeks I would get one day of actual writing and the rest of the time my creativity was dolled out the same way as everybody else’s – between the cracks, in the stolen minutes, when the boy is finally asleep, after I write these invoices, between these fifty emails, sitting in the carpark of the school I am teaching in that day, in the greenroom of another poetry gig.

This is reality, I would say, for almost every creative person in the world. Certainly every full-time creative who has ever been honest with me about the actuality of their lifestyle. The myth is never the reality. Reality is hectic tour schedules and broken relationships and lonely hotels and screwed up business deals and bloody hard work to make it all happen. So even if we are ‘full-time artists,’ we cannot escape the normality. The frustration of the everyday. We wont ever have an open slather of free time for our creativity. The dream of endless artistic freed 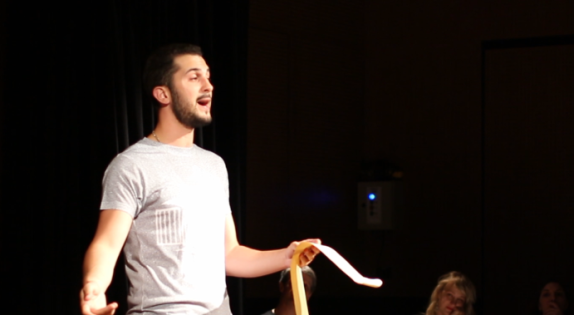 Abdul Hammoud and his poem ‘Dear White People’ was awarded one of the honourable mentions from The 2015 Melbourne Spoken Word Prize. Performed at Library at the Dock, Docklands on December 4, 2015.

Video produced by Melbourne Spoken Word. Thanks to Jez Speelman for filming.

About Abdul Hammoud Abdul Hammoud is a spoken word artist based in Melbourne by way of Lebanon, a country that he is still captivates by and connects to. Abdul has performed alongside poetic giants like Luka Lesson, Ken Arkind, Anis Mojgani, Sarah Kay, Taylor Mali and Shihan. He has also managed to teach numerous writing classes and workshops for schools and various organizations. His art has taken him as close as New Zealand and as far as the United States, as well as to his beloved home country. In 2013, he became founder of The Dirty Thirty online writing platform, an ever-growing group for writers to challenge themselves every April. He is now also editor and compiler of The Dirty Thirty Anthology, a collection of poetry from the page he coordinates. Most of his work revolves around current issues including the constant state of war in the Middle East, cultural division, as well as the portrayal of masculinity. He is also a full time student and an avid purveyor of starting books but not finishing them. 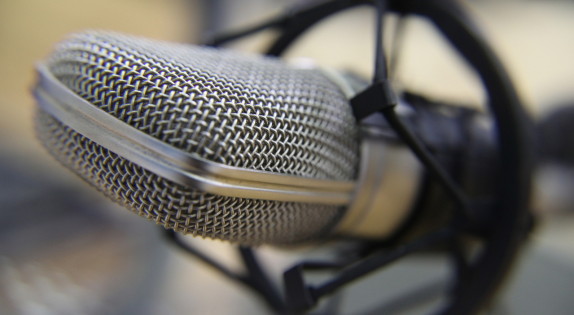 Last week, we talked about what radio shows you can tune into to listen to spoken word. It’s younger cousin, the podcast has for a while been a popular alternative to radio, and spoken word has had some stuff out in podcast form for you to subscribe to and listen to on your phone or off your computer at home.

The best Podcast to listen to, especially for Australian listeners, is La Danza Poetica, produced by DJ Lapkat. Produced monthly, there’s currently thirty-nine episodes and feature a wide range of Australian and international spoken word, including a whole lot of Melbourne artists.

Launched last year, Nathan Hondros and Robbie Coburn record The Australian Poetry Podcast with a focus on Australian poets. With nine episodes online, it hasn’t had a new episode since June last year, but we hope it comes back.

With its final episode coming in late January, IndieFeed: Performance Poetry has a huge archive of shows since 2006, with Melbourne poet Joel McKerrow as one of the hosts, featuring a nice range of Australian poets alongside a huge archive of American slam poets.

Canberra slam, BAD!SLAM!NO!BISCUIT! has an archive of twenty-three podcasts featuring a whole bunch of their featured poets from their gigs. Very interesting to see something like a podcast as an artefact of a gig, and evidence that Canberra is not just full of politicians.

It’s been suggested a few times and the idea keeps coming up that Melbourne Spoken Word should do its own podcast. Perhaps rotating hosts monthly, with interviews and featured poets from Melbourne. Let us know what you think of the idea in the comments.