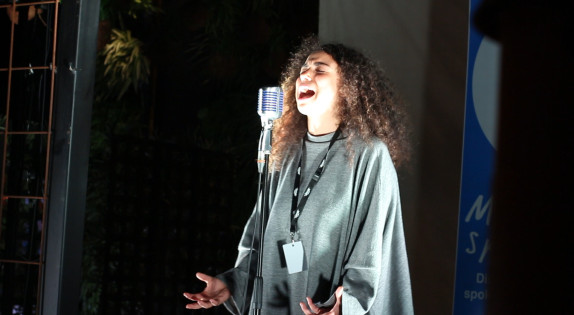 Arielle Cottingham is a spoken word and performance artist hailing from too many Texas towns to just pick one as her former home. Her poetry ranges from raw vulnerability to provocative politics, exploring how the personal influences the public, and vice versa. 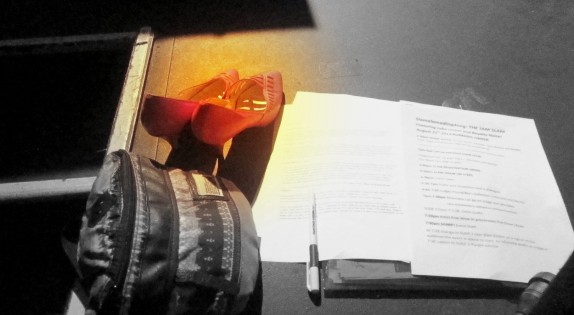 A new era from Slamalamadingdong this year

Over five years, Slamalamadingdong driven by Michelle Dabrowski has become one of the most consistent and go-to events in Melbourne, drawing in crowds all the time and providing a platform for spoken word artists to throw down in a polished environment, with top grade feature artists to boot. This year is Slama’s second year at the new Northcote venue 24 Moons, a bigger and more open space than the previous Bella Union, but this year, moves back to its previous Thursday night slot, at the end of each month.

This Thursday, the slam season opens with Slama’s traditional one-round open slam, this time challenging poets to the theme of “new beginnings. It features both Tumi and Lady Longdrop as feature artists as well as few others thrown in for good measure, promising to be a great start to their year.

But this new era in Slama is yet to be defined in total, and who that person is is yet to be decided. With the new season, Michelle Dabrowski, who’s produced thirty-five Slama events to date, outlined in her recent blog post, that she’s looking for a new producer to work with her in producing the main slam each month.

Luckily for us, this doesn’t mean we lose Michelle. “Of course, I ain’t really goin nowhere- infact I’ll probably be MORE PRESENT as I am really excited to be involved in Slama’s evolution from more of a mentorship role, supporting and training the new Producer/s and stepping in to help out each month at the live event,” she said. 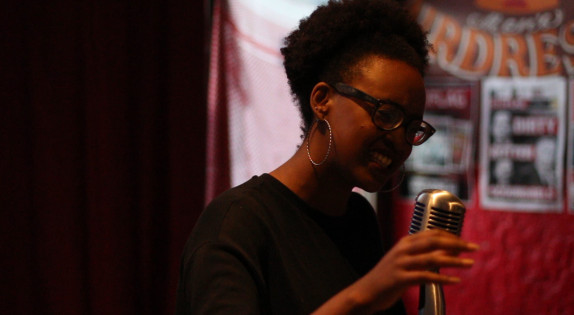 Soreti Kadir performs “Pain and fear” at the launch of Audacious, Issue Two at Under the Hammer on January 29, 2016.

Her piece “Because I am who I am” features in Issue Two of Audacious.

Being of Oromo heritage but having spent most of her life living in Melbourne, Soreti is committed to cultivating the power of the African diaspora through her work as one of the Co-Founders and the Directing Manager of In Our Own Words; an NGO focused on self-awareness, de-colonial thinking and community empowerment. Soreti’s expression as a spoken word artist and an emerging writer encompasses her passion for critical thinking, the strengthening of the African diaspora and community engagement. 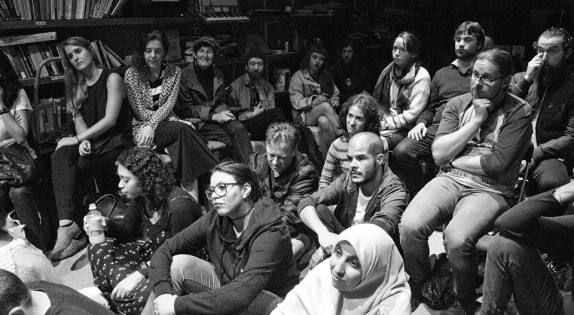 A guide to behaving poetically correct

In the 15-odd years I’ve been organising spoken word gigs (Jesus, that explains a lot), I’ve been asked on occasion how to successfully book the right performers without upsetting or alienating various people who feel hard done by or disrespected. Short answer is, of course, you can’t.

And in the 20-odd years I’ve been a performer in various art forms (good god, what’s wrong with me?), I’ve been asked how one is meant to put it all out there and not feel shit, slapped and artistically shaken when overlooked for a spot or a shot you wanted bad enough to cause tooth decay. Again, real short answer, you can’t.

You can try, nobody gets into running gigs or publishing poetry to piss people off, and you can be as open and transparent as you like, someone somewhere will take issue with your choices.

So here’s a little cheat sheet for all you would-be warriors of the word on both sides of the curtain from an idiot who just can’t stop.

Firstly, to the gig. Now, each gig is as disparate and diverse as each poet. The longest running gigs have become that by delivering to the audience they are aimed at a high quality lineup of writers and readers the target demographic has come to hear and grown to enjoy. The one-off and semi-regular gigs make their mark with diversity and the musical dichotomy of styles available in this vibrant community. To the gig runners and the venue hustlers and the money scrimpers and chair stackers, we salute you. None of us would have a shot to spit and shine if you guys didn’t do all this for dumb love of words and a willingness to kiss pavement. Steady as she goes, I’ll not be telling you how to shave a cat. But to those wanting gigs and open mic slots and recognition and praise, listen up.

There really is no magical formula to getting where you want to be. It’s a fairly cut and dry approach, tried and true. Firstly, you got to get out th 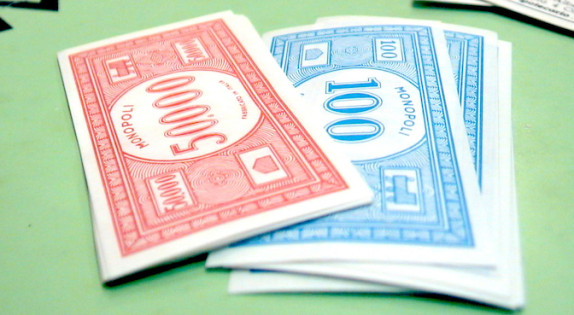 Paying poets: why it's not a dirty secret

When I entered the poetry scene in 2011, I was just happy on the open mic, writing something new each week, getting up on stage and reading, and of course, being in awe of the feature poets who got to do longer sets – and for a reason, they’re good at what they do.

So it’s flattering when they ask you to feature, some gig organiser sends you a Facebook message inviting you to perform for fifteen minutes – and then, at the end of the night, they slip you a yellow tinged bank note for your troubles, which you spend promptly at the bar. Sometimes it doesn’t even cross your mind that you’d get paid for this, for some, it’s just a hobby after all, we’ve got other jobs, and we do it for the love of it.

If some random guy pulled up in a truck and asked you to help him move some heavy boxes for the afternoon, you wouldn’t be all like “Oh I love moving heavy boxes, sure, I’ll do it for free.” We love performing poetry, so why should we get paid for it?

Well, for starters, other people are.

You to a gig, usually a pub or a bar, let’s be honest, and all those punters that came to see you, they might not know you or they might, but they’ve come to see a ‘pro,’ and maybe those punters have paid for tickets or they’ve bought a bunch of drinks at the bar, but whether or not you want to be untainted by the devil money that might compromise your art form, someone else is doing alright off you.

If we as poets, blush and just feel flattered that we get asked to perform, and it’s an unwritten rule that none of us really expect to get paid, even if it’s a nominal amount, then it sets a precedent, anyone looking for some cheap entertainment to pull people into their bar, or make their event look classy can ask us for free.

It’s perfectly understandable that sometimes we’d donate our performance for a good cause, if it’s a little gig that doesn’t make that much money, or a fundraiser for some wo 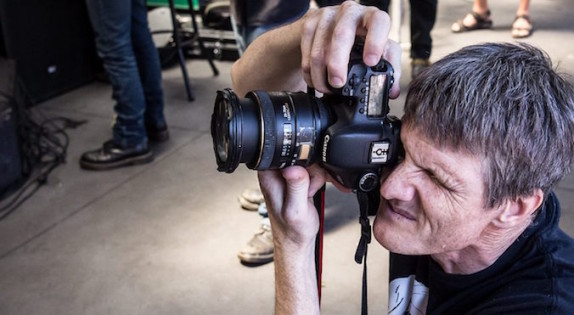 I’m sure for many people, not just me, Michael Reynolds is one of the first people you meet when you first discover the poetry ‘scene’ in Melbourne. The poet, photographer and host of regular gig Passionate Tongues is a friendly and welcoming entry point into reading poetry on stage, as many new poets turn up to the Brunswick Hotel every second Monday night to try their hand on the open mic.

“I try to give them the best impression of a poetry reading as possible,” he says to me over a beer one afternoon at the back of Brunny.

Michael grew up in Geelong (but he’s a mad Hawthorn fan) and only really discovered poetry incidentally as a regular at The Dan. “I’d go to the Dan to drink Guinness and listen to Irish music, and we’d always make jokes about the poets.” So he got some strange looks when eventually became one of us.

He recalls that Kevin Webb, the publican at the time, would say to him, “Hey check out the poetry at the back” and he’d respond, “Pfft, nup.” It wasn’t until the poetry moved to the front bar one afternoon, while Michael and his mate played Scrabble in the corner, that he decided to give it more of a go.

“Ted Lord, was actually someone I knew and he was hosting it, and afterward he came up to me said, ‘I didn’t know you liked poetry.’ And I said, ‘Well, I don’t really.’ And afterwards, I thought to myself, it wouldn’t be fair of me to say that after listening to it just once, ‘cause I’ve always told people to listen to bands twice…they might be having a bad day or you might be having a bad day, or there might be something that you’ve missed. So I put my money where my mouth was and listened to it the next week, and I thought, I’ll give this stuff a try. That was January, nineteen-ninety-nine.”

About six or eight weeks later, he performed on the open mic for the first time. “It was appallingly bad,” he says to me, “My knees were shaking so much. I