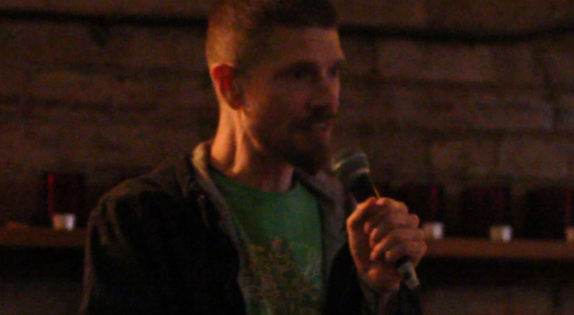 Daymon Greulich, AKA, ‘Hunch’ was a late bloomer in the garden of Spoken Word. Having worked for most of his life as a visual artist, it wasn’t until recently that he discovered the art of illustrating with language. Inspired primarily by personal experiences and dreams, in just under eighteen months on the mic he has already carved out a name for himself within the local scene spitting his distinctly original and rhythmic vocals. Wavering between the profound and the ridiculous, Hunch’s primary objective as a Spoken Word artist is to explore his own mind and use the medium as a form of personal therapy! You can find more videos by Hunch on his Youtube channel, ‘Hunch Nine’. 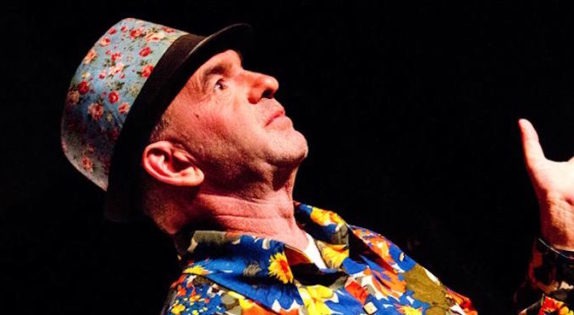 Announcing Audacious 3 and submissions for Audacious 4

Following the release of Issue One of Audacious in April 2015 and Issue Two in January 2016, we’re happy to announce plans for Issue Three and Four in 2016 including our first single artist issue and the opening of submissions for Issue Four.

Issue Three of Audacious features ‘The Collected Smirks of Santo Cazzati.’ The colourful face and musical voice of Santo Cazzati has been a regular fixture of the spoken word and poetry scene since 2006. The son of Italian immigrants, he entered spoken word from a past life as a concert pianist and avant-garde jazz musician.

He has featured at most of the regular gigs around Melbourne and interstate including The Dan, Passionate Tongues, Babble, The Spinning Room, La Mama Poetica, Eltham Courthouse, Bar Stanza, West Word and the Melbourne Poets Union as well as The Melbourne Writers Festival and The Queensland Poetry Festival. At The Overload Poetry Festival, he won the Shelton Lea Award for Best Solo Performance. He was the ‘Poetry Jockey’ of House of Bricks Spoken Word and is now one of the MCs at new gig, The Owl and The Cat Readings, as well as a founder and one of the hosts of 3CR Spoken Word.

Issue Three marks our first ever single artist Issue and we hope that this new project will open up more opportunities for spoken word artists to be published. We plan to release the Issue in the coming months.

We’d also like to announce the opening of submissions for Issue Four of Audacious, hopefully due out before the end of the year. Issue Four is the first issue that will edited and selected by the Melbourne Spoken Word Committee, including Benjamin Solah, Amanda Anastasi, Anthony O’Sullivan, Kendra Keller, Sam Ferrante and Arielle Cottingham. Work will be selected from the pool of open submissions, with some pieces commissioned, as well as featuring the 2015 Melbourne Spoken Word Prize winner, Steve Smart and 2015 Slamalamadingdong Season Finals winner, Jo 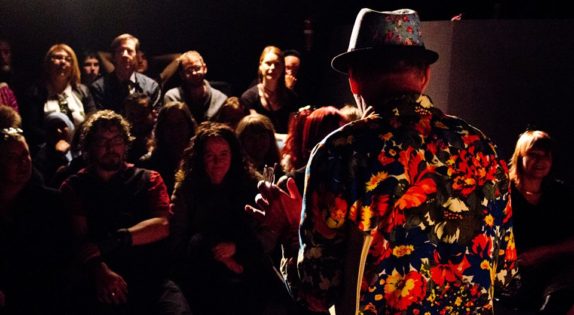 On the evolution of Melbourne Spoken Word as an arts organisation

One of Santo Cazzati’s favourite phrases when he used to MC House of Bricks was to proclaim loudly that “it’s grassroots” when describing the nature of this amazing ecosystem that we’ve found ourselves in called spoken word.

The amazing thing about the spoken word scene is that for decades there’s been this network of readings, open mics, slams, launches each run by poets themselves, off essentially our own steam, often because of their own love of poetry, each one with a subtle or sometimes radical difference in mood, audience, some vague thing called ‘vibe.’ Some gigs fade away and new ones spring up started by fresh faces on the scene.

It’s with this in mind, and supporting the rainforest of spoken word gigs, that should inform us when we’re thinking about Melbourne Spoken Word officially becoming an arts organisation that supports and unites the spoken word scene. I imagine MSW is like a big bat signal. We can each kind of shine our own lights around trying to attract people to our various gigs, but if we put the power of our lights all together, we have enough light to somehow light the sky up and attract people to the whole thing. Once you go to one gig, you end up finding about others. Chances are the person sitting beside you will mention they’re going to such and such reading in two nights time.

Our goal this year is to become an incorporated not-for-profit arts organisation. Some of the motivations for this are boring but necessary; separating the organisation from myself legally so that MSW has its own tax file number, ABN, bank account and legal status. But it’s also about creating a funding base that can make it more powerful, powerful enough to light a big bat signal for instance and do things for promoting gigs, and poets and raising the profile of spoken word that a grassroots scene so far hasn’t been able to do. 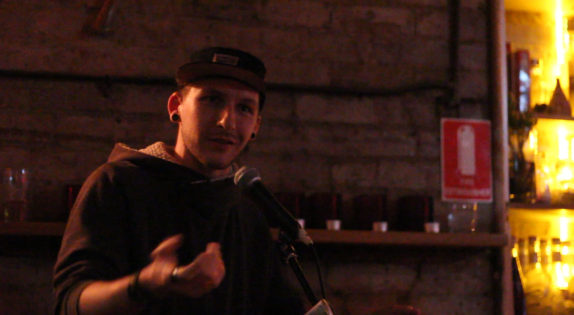 Will Beale / Never Break Up with a Poet

Will Beale performs ‘Never Break Up with a Poet’ at Voices in the Attic on April 12, 2016.

William Beale is a spoken word poet, writer and actor currently based in Melbourne. His debut poetry collection, “THEY CALL US LOUD” is available throughout Australia and Southeast Asia. As Co-Creative Producer of Slamalamadingdong, one-third of Three Round Circus and co-founder of If Walls Could Talk Open Mic, William has years of experience performing, producing and teaching in international poetry communities. His work has been called “a boy howling his way into the world, despite all its muzzles”, but in real life he’s just glad he’s afraid of moths, not microphones. 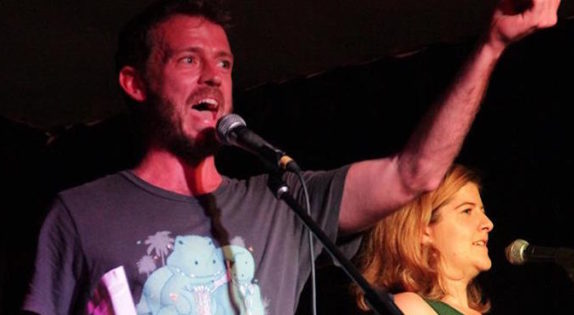 Last Monday, the invasion from Brisbane was completed. In the back of a bar on High Street, Melbourne poets gathered for the Melbourne launch of famed Brisbane slam, Ruckus Slam, headed by the dynamic and dinosaur loving host Scott Wings.

It was pretty clear from the start that Ruckus is no ordinary slam. Perhaps it’s taken on the joking spirit of Marc Smith’s original idea, with a score out of five instead of ten, and instead of decimal points, the scores are whole numbers signified by dinosaur cards, with the famed ‘Jurassic Prose’ card signifying five. The judges were given shower caps to wear and at the halfway point, five members of the audience, including one of the judges, were challenged to the audience challenge, constructing a little dinosaur figurine.

Both hosts, Scott Wings and Meg, who came down from Brisbane for the launch, really set the tone of the night, from Meg scowling at those clicking their fingers throughout the night, which made people revolt by clicking their fingers more, to both of them beatboxing for a poet whilst they performed for the first time. The audience, including one heckler sitting on the couch near the front of the stage, were responsive and loud.

The poetry of course, the important part, was on point. Ten slammers were randomly drawn so you didn’t know when you were going to be called up. There was a healthy mix between serious and funny, memorised and off the page. Following the first one though, after slammers see what the mood is like, it’ll be interesting to see if that affects what pieces poets might bring to the slam next time round.

In the spirit of the night, the slam ended with Roshelle Fong performing a weird and wonderful sound piece using only a few words repeated, scoring all ‘Jurassic Prose’ cards, and the audience all standing up singing to the tune of the Jurassic Park theme, “Holy shit, holy fucking shit, fucking dinosaurs, it 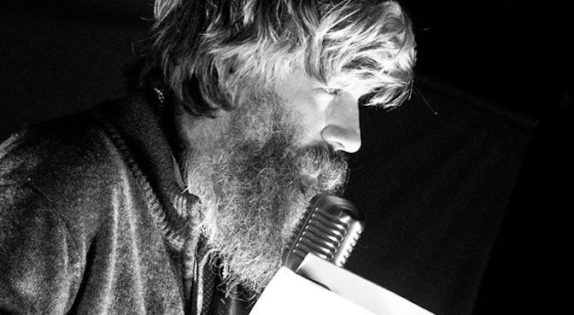 One of the highlights of last year’s season of spoken word events around Melbourne was undoubtedly the monthly competitions held by the Dan Poets on Saturday afternoons, a break from the regular format of feature performers with an open mic section.

These monthly competitions were the inspiration for The Winter Feast Spoken Word Competition that’s also to be held at The Dan O’Connell Hotel this July.

It’s been launched by Shane Hill, a Dan regular for over four years, who only considered himself in the ranks of the ‘Dan Poets’ after last year, when he began reading on the open stage for the first time.

“I was utterly delighted with the quality of the performances. I found it very exciting and inspiring to see such excellent work,” he said. “A spoken word competition is an awesome way to inspire people and show others the very best of what performance poetry is.”

With the help of Libby Charlton to compile the procedures and rules and an anonymous donor for the prize money, the new competition offers $1,700 in cash prizes and Shane hopes that the prize money will attract performers from across Melbourne and Australia.

With two qualifying rounds between 10am and 1pm on the Saturday the 23rd and Sunday the 24th, a maximum of 150 registered poets will be whittled down to 30 poets for the final at 4pm that Sunday afternoon.

The judges are yet to be announced, and they won’t necessarily be people from the spoken word community but will be headed by Joseph Carmel Chetcuti, another regular at The Dan. On their Facebook page, the criteria for judging includes performance, content, language, rhythm and captivation. The criteria “allows [their] judges to convert their authentic reaction to your chosen piece and your performance into a number score on the score sheet.”