Ruckus Slam happens toward the end of the month on a Monday night at Bar 303, Northcote.

Lewis McLeod is a born and bred kiwi, a small town lad with a big heart. Heard good things about Melbourne so decided to cross the ditch to see what all the fuss was about. Was peer pressured into speaking at an open mic and since then, has never looked back. Last word Lewy.

If you like the videos, hit the like button, subscribe to the channel for more videos each week from spoken word and poetry gigs all around Melbourne. 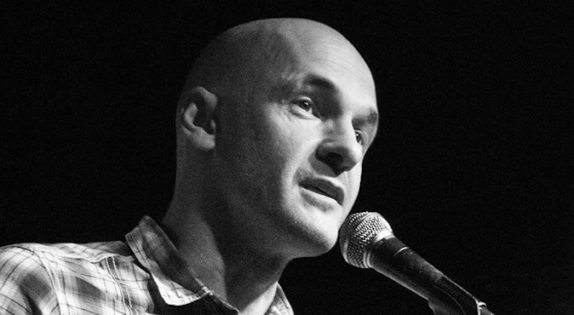 I know Brendan Bonsack first as a photographer. He is a familiar sight at spoken word events in his black on black uniform, camera poised, a reticent presence but his slight smile always at the ready. His black and white specials are beloved profile photos by performing poets. I knew from seeing him perform “A Rough Guide,” at the 2015 Melbourne Spoken Word prize that he could also be a wry and entertaining story teller. I knew from the multiple books and albums featured on his website that he was prodigious and multi-talented. But he doesn’t perform so often on the open mic “circuit,” so I was excited when I discovered that he would be featuring at the Eltham Courthouse in August.

The high ceilings and historical feel of the courthouse turned out to be a lovely backdrop for the performance. Mr Bonsack stepped up to the witness stand with his guitar and quietly introduced his performance by suggesting we needn’t clap between pieces. This was followed by roughly half an hour of sung and spoken poetry. It was like being given a brief tour of a weathered, much-loved and deeply storied house. Each room or setting was beautiful on its own, but it was the house as a whole that revealed the heart and artistry of the set.

I also got the accompanying chapbook that was offered on the night, “Tiny Drum” which turned out to be like liner notes to a favoured album. This article is a joint to Brendan’s performance at the Eltham Courthouse and his chapbook “Tiny Drum” that started off as a memory aid but is slowly beginning to supplant my memory of the night.

Moving effortlessly between song and poetry, Brendan ushered us into the house. With his first short piece,

“I once knew a doctor a doctor of the mind

we were humorously welcomed into the parlour, given a hint of so much more, then deftly moved on.

Some doors opened onto intense memories: 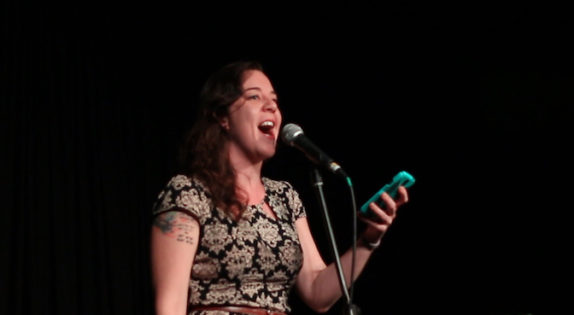 Sam Ferrante is a poet, editor, facilitator, and writer born on Long Island, college-fed in Western New York and Paris, and then poetically raised in Buffalo, NY, Ireland, and Australia. A former member of the Pure Ink Poetry team in Buffalo and a regular competitor in Dublin’s Slam Sunday, Sam is now a Co-Creative Producer at Melbourne-based Slamalamadingdong. She is also Editor-in-Chief for online magazine, CrowdInk, and a regular attendee of as many poetry events as she can cram into a week. Her debut book of poetry, Pick Me Up got rave reviews from her Mom. 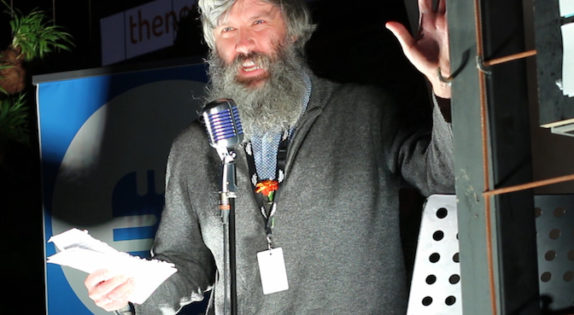 Timothy Train lives in Lalor with all his friends. Oh, wait. He means cats. And chooks. And a whole bunch of bees. When he is not appreciating the wild life, he is busy avoiding work or very occasionally writing a poem or two. He blogs at http://willtypeforfood.blogspot.com, self-publishes Badger’s Dozen, and poets at the Dan O’Connell Hotel on Saturday afternoons. 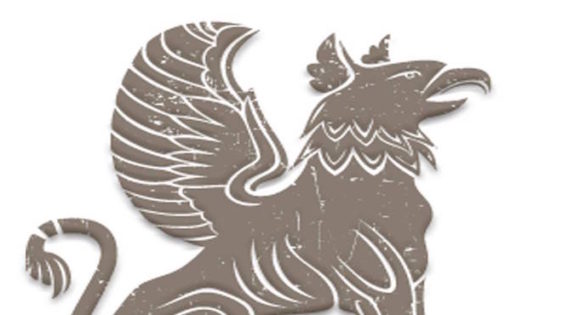 Interview: Sharifa and Joumana on GriffinSpeak

One of the lovely things about the scene is how every event holds such a different feeling, philosophy, and intention. It’s my favourite thing to attend an event for the first time and soak in the vibe.

When Sharifa Tartoussi approached me about featuring at a new event with a focus on diversity and acceptance, I felt honoured and lucky. She had blown me away with her performance at the Melbourne Spoken Word prize. But in preparing, I obviously couldn’t attend one before the inaugural event. So I decided to interview Sharifa and her partner in crime, the inimitable Joumana Soueid about Griffinspeak.

A special spoken-word event showcasing all that is diverse and wonderful in the Melbourne spoken word scene. Based on the idea of the Griffin: a mythological creature made up of power and majesty of the kings of both land and sky, GriffinSpeak is a celebration of artists of diverse backgrounds and styles with a focus on creating space for their stories as they would have them told.

Here is the backstory.

1. How did Griffinspeak come about?

Griffinspeak was born of a need – after joining the Melbourne poetry scene, we realised that the amount of venues that were truly diverse and open for all was not as many as we wanted. Rather than wait for somebody else to do it, we decided that we would create a space that was safe, open and deeply diverse and beautiful.

Joumana had wanted an event that showcased diversity and Sharifa wanted something that nurtured up and coming poets.

The event was born during an internet conversation, where we discussed starting an event that showcases both new and well-seasoned poets from diverse backgrounds who might not get enough space on the scene. One that is accessible to as many people as possible. Sharifa jumped the gun and contacted our features, Joumana used her mad tech skills to get sponsors and create poster

Brydie Grace / The splayed fingers of so many hands

Brydie Grace performing ‘The splayed fingers of so many hands’ at Slamalamadingdong in July.

Slamalamadingdong happens on the last Thursday of every month at 24 Moons, Northcote.

Brydie Grace has always thought she would end up a ‘writer.’ When she was growing up in the country town of Leongatha she wasn’t too sure what that meant, except that it had to include trilogies and poems that rhymed in couplets. She stumbled across the Melbourne spoken word scene at Voices in the Attic in March this year and realised you could speak the words you syphon out of you. She hopes to continue using her writing as a cathartic process and, fingers crossed, gets a bit better as she continues to study Philosophy and Creative Writing at The University of Melbourne. She might even be a ‘writer’ one day.