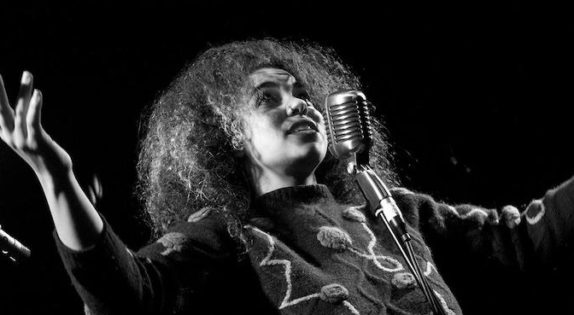 We’d like to congratulate MSW committee member, Slamalamadingdong co-producer and all round awesome adopted Melbourne poet, Arielle Cottingham, for taking out the Australian Poetry Slam Championship last week. MSW Director, Benjamin Solah, had a chat to Arielle following the win.

Tell us a bit about how you got introduced to spoken word?

Hoo, it’s a bit of an involved story. I stumbled across spoken word more or less by accident. I always kept my old high school English textbooks, and I was cleaning out my closet in my parents’ home over the summer when one of them fell open to a page in a chapter we hadn’t covered in class that year. In the sidebar, there was a photo with a caption along the lines of “Staceyann Chin is a world-renowned spoken word poet.” I hadn’t heard of spoken word at that point (I think I was about 17), and thought I’d look it up. I promptly forgot about the book, and then, a few months, maybe a year later, I happened to open the book to the same page, and thought, “Okay, I’m actually going to look this up now.” The first poem I clicked on was her piece “If Only Out of Vanity,” and I was completely floored. I clicked on more of her work, and then found Phil Kaye, Sarah Kay, Andrea Gibson, and Anis Mojgani within the next few hours. I was so starstruck with them I didn’t even think to write for performance for another several years; I would just binge on YouTube videos of poets every once in awhile and try to show my friends. I eventually wrote a couple of poems for performance, but didn’t have the resources to find or get to poetry readings in my hometown; Houston doesn’t really have a central portal for finding poetry events like MSW, so I didn’t have an entry point.

Fast-forward several years. I studied abroad at University of Melbourne, and during my stay a friend in the theatre community mentioned that Anis Mojgani wa 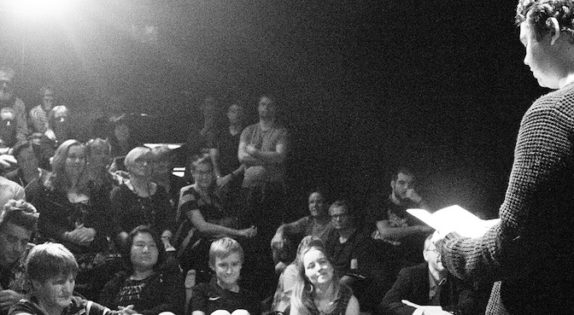 I recalled your ghost, transparent in the open paddock, a thin veil of fog beginning to leak into the frame. 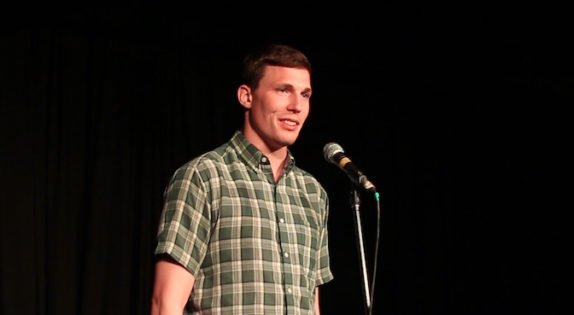 Chad Sunshine / A Beginner's Guide to Being Wildly Unhappy

Chad Sunshine performing ‘A Beginner’s Guide to Being Wildly Unhappy’ at Slamalamadingdong, on September 29, 2016.

Chad Sunshine (unfortunately not his actual name) is a teacher, poet, jiu jiteiro, and nap-taker from Edmonton, Alberta, Canada. With a flair for honesty (and self-deprecation), he writes to tell stories and connect with people on topics ranging from love to privilege to death and beyond. If you ever have to say goodbye to him, he may impart his entire life’s motto onto you in four simple words: “Have fun, be good.” 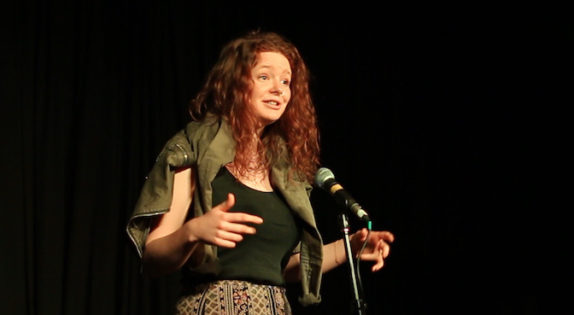 Brydie Grace / Never Too Much

Slamalamadingdong is on the last Thursday of every month at 24 Moons, Northcote.

Brydie Grace has always thought she would end up a ‘writer.’ When she was growing up in the country town of Leongatha she wasn’t too sure what that meant, except that it had to include trilogies and poems that rhymed in couplets. She stumbled across the Melbourne spoken word scene at Voices in the Attic in March this year and realised you could speak the words you syphon out of you. She hopes to continue using her writing as a cathartic process and, fingers crossed, gets a bit better as she continues to study Philosophy and Creative Writing at The University of Melbourne. She might even be a ‘writer’ one day. 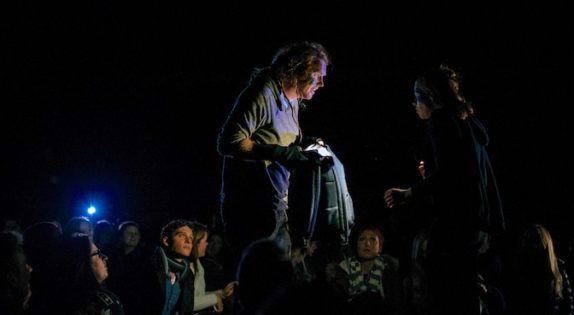 People of the Sun: A Protest For Life

People of the Sun is an intimate collaboration between spoken word poet Joel McKerrow and playwright Anna McGahan. It is a multifaceted poetic and theatrical exploration of the theme of lightness and darkness, and all the shades between.

At the surface layer, it imagines a post-apocalyptic world where the sun has long disappeared. It traces the lives of two central characters – Joel and Anna – as they struggle with the darkness that permeates Fluoro city and yearn to see more.

The lighting and timing of space are an immersive and powerful reminder of theme. To enter, the audience must first give up their deepest secret. Characters slowly emerge from the seams of darkness, offering clues to the fate that has befallen the city. The story then unfolds through a series of narrative pieces performed by McGahan and McKerrow. It is only after light has been revealed that some of these secrets are shared; the grip of their darkness thus broken.

Those familiar with McKerrow’s work will recognise the roaring crescendo that pierces through each of the narrative pieces. The sense of hope is there, as is the invitation for people to be and join something larger than themselves.

What is different is the duality in voice as the reigns of poetic creativity are now seamlessly held by two. The initial poetic narrations were developed by McGahan, with each scene subsequently improvised, devised, and revised by McGahan and McKerrow together.

The end outcome of this process is as evocative as it is haunting; a testament to the mastery of the show’s creators of their respective disciplines. A delicate urgency and beautiful fragility permeates every word, action and sound. Although light and dark, seen and unseen, are repeated often, each utterance reveals a fresh, alternate concept for the audience to explore, react and attach meaning to.

This is the real brilliance of People of the Sun; to take the stories and experiences of two