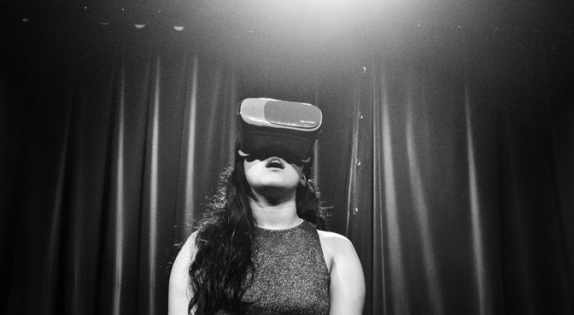 When I think of going to a spoken word event, what usually pops to mind is a mic, a voice, and some floral poetic language. This usually culminates in either an inspiring and uplifting call to action or a realisation of how insignificant human life really is at times. I also often imagine low lights, generally a spot, and a single, mystical looking figure dressed in black speaking at me (usually at me, sometimes to me, depending on the poet I guess).

What I don’t imagine, is VR headsets, partial nudity and witnessing the uncomfortable yet strangely sexual act of someone forcibly deep throating a print out of the entirety of the Wikipedia on China. Welcome to Roshelle Fong. I have seen this woman perform three times now and each time has left me with a strange and yet wonderful feeling that all is somehow complete fucked and simultaneously perfect in this world. Roshelle’s performance for Girls on Key was no different.

When I first arrived, I was disappointed to notice there was a cinema/bar happening in the room next door and we were squished into a tiny back room, enhancing my feelings that spoken word is often not given the stage it deserves in society. However, in honesty (and to the dismay of my ever eager critic), the sound didn’t overlap and the intimacy of that tiny room only worked to enhance the disturbing and yet alluring sensations I was about to experience.

Before Roshelle, Carmen Main shared a piece she had originally prepared for the Biscuits series set up by Ruckus. It set the tone up well with features such as the use of voice-over and props, in some way preparing us for what was to come. Carmen had mentioned it was something very different for her to try and I truly commend and respect her for stepping up and pushing boundaries into the world of performance art, and hope she continues to play with it further.

After a break, we were back for Roshelle’s set. Something Roshelle does absolutely as 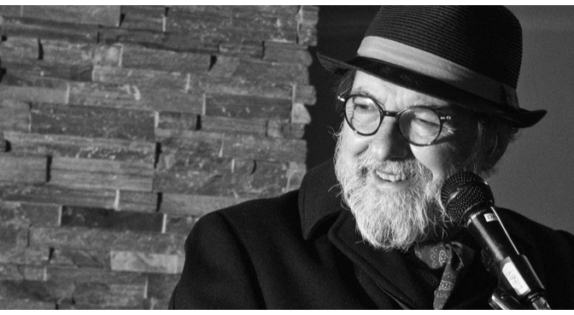 Komninos Zervos has been performing poetry since 1980, and doing it professionally since 1985. He’s performed all over the place including the National Folk Festival, Brisbane Livid Festival, had a residency on Triple J and most recently featured at La Mama Poetic and Melbourne Spoken Word’s VCA Slam. He’s released nine poetry collections and can be regularly found at the Dan Poets of a Saturday afternoon.

Can you think of a moment that was probably a dead give away you’d become a poet?

when i registered for unemployment benefits in 1985 after being a research microbiologist at kraft foods, a youth worker for australian greek welfare, a travel agent for jetset tours, a coffee lounge proprietor and a welfare worker trainer, i decided to be a poet with no other job so i put poet as my occupation.

well it discovered me. i had a coffee lounge, tsakpina, in warratah place melbourne (now the wah wah lounge) and in 1982 thom the street poet asked me if they could have a weekly reading on wednesday nights, pio also asked me for monthly readings for his 9to5 magazine. that was my first contact with spoken word events. after listening to their poetry i decided what i had been writing in my diary, mainly about painful relationship break-ups was similar to some of the performance poems i was hearing, so i started reading some of my diary in public.

well the dan poets on saturday i feel is the most accepting and critical enough to try new work. in fact a lot of my new work is written at the dan and performed on the same day. 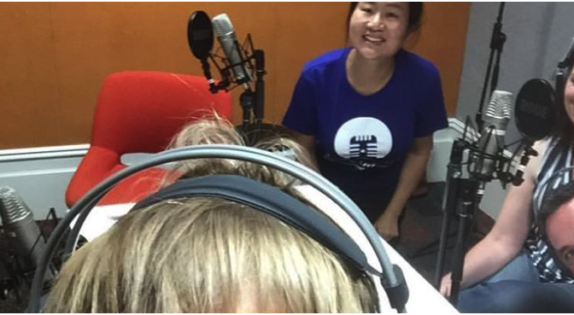 Welcome to the first episode of Melbourne Spoken Word’s new podcast, Melbourne Speaks Poetry, where we discuss the art form of spoken within and around Melbourne.

In episode 00, we introduce ourselves and discuss what the podcast aims to do and what is this art form we call spoken word. Featuring Benjamin Solah, Anthony O’Sullivan, Amanda Anastasi, Esme Foong and Brendan Bonsack.

You can subscribe to the podcast via RSS, SoundCloud, iTunes and many other podcast apps.

Can I Kick It? 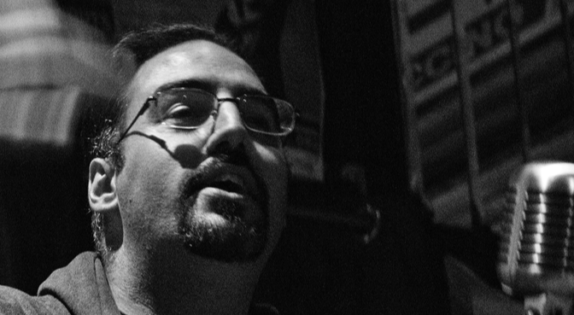 Ahead of the launch of If the world were turned upside down, we chat to John Englezos.

Can you think of a moment that was probably a dead give away you’d become a poet?

Not really. I think storytelling has always been something I’ve enjoyed, in reading, speaking, listening and performing so it was only a matter of time.

I photographed Joel McKerrow’s book launch, then went to his writing workshop and was invited to Slamalamadingdong after to see some poets do their thing. That was 2013, fell quickly in love with the community and the rest is history.

Just one?? Couldn’t I build a shelf in the bunker?

Through The Lover’s Window by Cameron Semmens.

As much care has gone into the pages themselves as the words written. It’s just a really beautifully prepared book.

Bar Oussou for the laid back and welcoming crowd.

Rowan White, for his profound words, his intentional living and his love for everyone.

What’s one spoken word artist or performing poet you wish more people knew about. Do you have a favourite poem or video of them?

Brendan Bonsack. This man never fails to amaze me, the moments he describes distilled with his choice words.

What are you working on now?

I’m working on putting together a really special night for my book launch in March.

I’m working on a couple of other creative projects to hopefully release later this year.

And just generally, trying to take better care of myself and others. 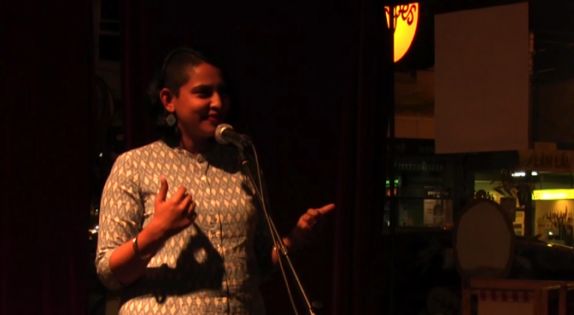 Rochelle D'silva / Do birds ever die of old age?

Rochelle D’silva performing ‘Do birds ever die of old age?’ at Girls on Key, February 1, 2016.

Filmed by Brendan Bonsack, with the assistance of Philip Kent-Hughes.

Girls on Key is hosted on the 1st Wednesday of the month, at Open Studio, Northcote.

For info on all spoken word events, go to melbournespokenword.com/events

Rochelle is a page/performance poet who writes about her travels, cultural influences and personal experiences. She’s been performing since 2011 and runs a monthly open mic in Bombay called ‘Words Tell Stories’. She also started the first slam in the city called ‘Mumbai Poetry Slam’. Rochelle has been published in numerous anthologies and has performed on various stages across Australia, Malaysia, Nepal and India. She has a love affair with trees and hopes to live in a tree-house someday. She is more poet than human and has perfect bottle-opening hands. Catch her at a poetry gig before she disappears into the mountains. 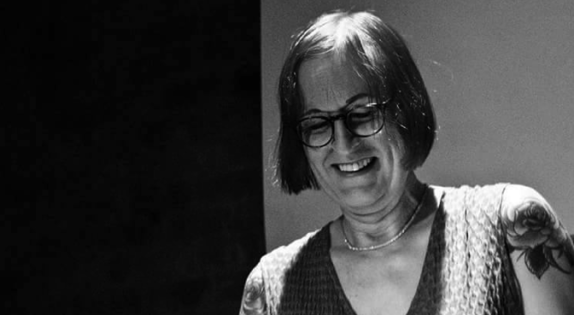 We spoke to the winner of The 2016 Melbourne Spoken Word Prize, Kylie Supski.

Can you think of a moment that was probably a dead giveaway you’d become a poet?

Kylie’s career as a spoken word artist was brutally interrupted when she was only a couple of months old. A careless babysitter dropped Kylie from the change table and she did not speak, until she was magically awakened by Melbourne Spoken Word. As for becoming a poet, Rainer Maria Rilke once said: “Don’t ask me about being a writer. When you wake up in the morning and you can think of nothing BUT writing, then you’re a writer.” (from Letters to a Young Poet Quotes).

After taking part in “Queering the Body” theatre workshop and performance, at Theater Works, in January 2014, Kylie could not wait to get back on a stage again. In February 2014 Kylie attended her first spoken word event at Slamalamadingdong. She missed out on reading that night. But luckily next month Michelle Dabrowski pulled Kylie’s name from a hat and this was the first time that Kylie read, and she never stopped ever since.

It would have to be Sylvia Plath’s “Ariel.” Just to be on a safe side, Kylie tattooed one of the poems from “Ariel” (“Edge”) on her arm.

Kylie reads her new poems first to me, then to her daughter Savannah and her love Stefanie. Once they approved and after many rehearsals, Kylie loves reading her poems “Girls on Key” or “To the Ends of the ‘Verse” or “Passionate Tongues.”