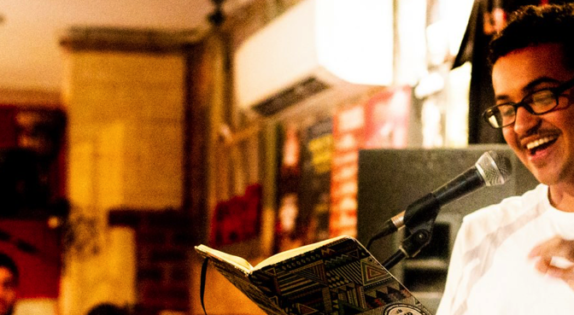 Perhaps it’s slight self-interest or perhaps it’s obvious but the opportunity for anyone to sign up and get up on a stage around Melbourne and perform poetry through our city’s network of open mic poetry gigs is at the heart of our poetry scene, and the heart of our Melbourne Spoken Word & Poetry Festival.

After all, it was turning up to Passionate Tongues one wintery Monday night in 2010 that I finally felt I found a home for my words, after feeling discouraged by the submission and rejection game of literary journals, which isn’t to say that that side is worth giving up on, but that sometimes you just want to take part or be heard or start somewhere. But poetry and spoken word is unique not just in the special way it plays with language but the ways in which it brings people together and allows anyone to be heard.

It means it attracts not just people who want to be the audience but want to participate. Whether they have a particular story to tell regardless of who hears it, or if they’re trying out new work in order to refine it. The open mic features the new poets and the established, those doing it for fun or those trying to make a career out of it. You don’t need to be invited or accepted, you just need to show up.

Nowadays at Bar Oussou on Monday nights, sometimes half of the people that stick their hand up to read on stage are doing so for the first time, with host Hamish Danks Brown encouraging them by boasting of their “100% survival rate’ for first time readers. At The P Word Sessions of a Sunday afternoon, you can get established poets like Kevin Pearson coming from around the corner to share some new work and to support the featured poets on show.

You never quite know who’s going to show up, and what new work people have up their sleeve. Often poets shoot up out of nowhere, with an arsenal of poems you’ve never heard before, appearing at open mic a