“Start with that place within you” 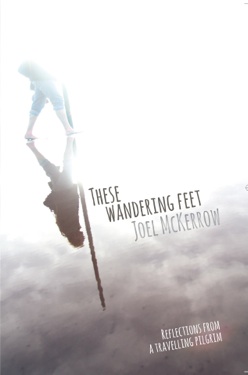 From the opening line of the first poem Water, you know that this collection is not merely an offering of poems but a spiritual offering. Good poetry is a thing of spirit and reflection by nature, however this collection has a focused intent from the outset. Subtitled “Reflections From A Travelling Pilgrim,” the author’s hope (as he states in his introduction) is that “your eyes become wider.”

The book is divided in four sections: The Water That Flows Between Us, The Wind That Blows Above Us, The Earth That Stands Below Us and The Fire That Burns Within Us. That is, as Joel explains in his introduction “our connection with each other, with the divine, with the earth and with ourselves”. The structuring of the book under these four elements adds to the pervading universality of the work, the four elements of nature being prevalent in hindu, Buddhist and pagan traditions. There is also no shortage of biblical imagery, but the focus is on the expansiveness of the travelling spirit, the richness of the present and the dropping away of the ego.

In Ayrshire Scotland and Hasten Ye Back, McKerrow explores the places and people of his ancestry. In poems such as Betty Winifred King he makes himself the mouthpiece for the stories of those that came before him. Although Joel on one hand urges the “tossing in the fire…this notion of ‘I’ ‘you’ ‘us’ and ‘them’” in Kindling, he holds strong to things of culture and ancestry, perhaps giving him a point of reference from which to move in new directions. I enjoyed the slightly grittier poems in this section, such as Broken Pavement and Lawrence Cook. Refugee was also strong.

Joel subverts the traditional gender of ‘God’ by using the pronoun ‘She’ and then later also ‘He’. In the section titled The Wind That Blows Above Us, Joel is incessantly looking toward God, finding him/her in unexpected and untraditional places. Many of the poems in this section have a parable-like quality. In poems such as Veneration, the rhythms reminded me of the Beatitudes, but on the whole the influence of Gibran’s The Prophet is palpable.

In The Earth That Stands Below Us the poems are rhythmic, musical and yes, earthy. There are many quiet moments here, whether it be enjoying the cosiness of a pub in A Rainy Day In London, the light reflection of Turn of the Season or the recognition of lost innocence in Raindrops. Joel revisits his cultural heritage again in On Leaving Australia. I found Untwisting particularly resonant – the search for true self and the hard look in the mirror, recurring themes in this and the final section The Fire That Burns Within Us. There is a slight Socratic influence in Uneducation: “It is time to un-know all that I have known.” There is a nod to C.S. Lewis and Tolkien in The Inklings and there is nothing that sums up Joel’s poetic voice more than his words in Spoon: “May my gaze be gentle.”

Joel’s language is lyrical and accessible. Its messages are clear and it creates its own gentle music, even before the CD with musical accompaniment is played. In poems such as Water, Channel Crossing and These Drunken Fountains, the ebb and flow of water is mimicked in the syntax and line breaks of the poem. Also in Swagger & Stumble the lines are abrupt and short, suggesting the new and uncertain steps of one learning.

The CD of These Wandering Feet is well worth a play and features music largely composed, recorded and produced by Spike Mason of Poatina Tasmania. The piano tracks are composed by singer/songwriter and pianist Colleen O’Connell. On the whole, the music works harmoniously and beautifully with the spoken word. Joel has quite a pronounced, musical performance style that is aimed primarily for the stage, though I often found reading the poems on the page a quieter, more thought-provoking experience. Poems such as The God Poem and Veneration, however, are truly magical as an aural experience. Here McKerrow’s voice – at its most natural in intonation – combines with the musical accompaniment to deliver some quite moving moments.

Whether you choose to read the book or listen to the CD, there will be a line or an image to cause you to think or rethink. These Wandering Feet will inevitably, to use Joel’s words, “create space in rooms too crowded.”

Both the Book and CD for These Wandering Feet can be purchased from JoelMcKerrow.com or from Joel in person at any events he may be at.