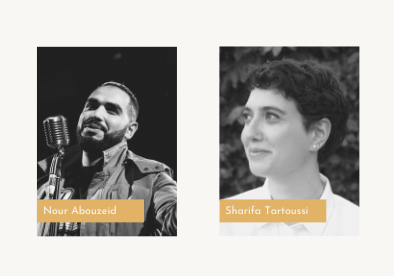 Join us for a live spoken word event where talented Muslims take centre stage with their most soulful lines. These poets will leave no stone unturned as they seek their truth, and the audience will be called upon to decide the winner of the first ever AMWF Poetry Slam.

Nour Abouzeid
Nour Abouzeid is a poet, spoken word artist, and creative curator based in Melbourne.  A regular on the Melbourne slam scene, he has often been described as loud and outspoken, which he attributes to being a Millennial Muslim Arab-Australian with a lot to say.
In addition to working closely with many local artists, he has also performed alongside acclaimed international artists and performed in the UK, Malaysia, and the USA.
In 2010, he was the Victorian State Champion at the Australian Poetry Slam and again a state finalist in the following years.  In 2018, Nour qualified for the Melbourne Slam Team, the only team representing Australia at the National Poetry Slam in Chicago.

Sharifa Tartoussi
Sharifa is a poet and spoken artist based in Naarm (Melbourne). Their performance journey has seen them crowned the APS Victorian Champion, open for Sierra DeMulder as part of the MSWPF showcase and has seen them feature at several festivals and events around the country. Their written work has been published in several local and international literary magazines, including white ash and Cordite. In the arts organisation space, they were involved in the co-founding and convening of GriffinSpeak, a spoken word event that preferentially champions the voices of BIPOC artists and is on the production team at Slamalamadingdong, Australia’s sole PSI certified slam. Their first chapbook, Colourblind, was released in 2018 and explored issues of their Muslim-Arab identity in a Western context, they are currently working on releasing their second body of work Anthesis which focuses on themes of healing, growth and the ever-changing dynamic that is identity.