Arielle Cottingham took the Melbourne poetry scene by storm a few years ago, hailing from Texas, she made our city home and featured all around town, taking the Australian Poetry Slam Championship home in 2016. After sadly leaving us, Arielle returns to Melbourne for the Melbourne Spoken Word & Poetry Festival this July so Emilie Collyer sat down (digitally) to have a chat to Arielle about writing, spoken word and her upcoming workshop.

Where does work emanate from for you?

It seems like too easy an answer to say my current emotional state, but there it is. When I first started performing, I had a lot to say that came from a place of justified anger that hadn’t had a place in my life before. I still carry that anger – anyone who doesn’t isn’t paying attention – but since I’ve been able to express that anger, I’ve found room to express other things, as well. Living in Hobart, watching winter roll in off kunanyi and gathering friends for dinner and fireplace chats – all of this warmth against the cold has found its way into my writing lately.

How do you know when a piece of work is brewing?

When I can’t get a phrase out of my head, or when I get the urge to look back through all the fragments of unfinished poems scattered through my notebooks.

Can you talk about the balance between generating an idea, creating a piece and revising or editing it?

Generating ideas and creation go hand in hand for me; I get too easily distracted if I stick to thinking up or speaking ideas without writing them down, and writing is the first major step of creating for me. Voice and physical choreography grow out of the text. Revising and editing are vocal processes for me, too – do the words sound good in that particular order when I say them out loud? Do I stumble over awkward lingual transitions? Will people pick up on this motif when they hear it for the first time, or is it too obscure to catch without reading it first? I modify the writing based on the answers to those and similar questions. Writing and performing are two different art forms, and writing for performance means that performing has to be part of the full creative process.

Where do you look to when you need some fresh inspiration?

I get on with life. Go for walks, go dancing, read books I’ve been putting off, talk to people I care about, research things that interest or affect me in some way. I never leave home without a notebook and a pen, though. Inspiration will come when it comes – you just have to make fertile soil for it when it does decide to show up.

Is there something you know now that you wish you’d known when you started out as a writer and performer?

I wish I had known that, unless you live in a city with a very well-established poetry scene, a lion’s share of organizing gigs will inevitably fall to the people who need the opportunities they’re creating for others.

Is there anything that spoken word ‘should’ or ‘shouldn’t’ do?

Spoken word shouldn’t be therapy. It’s unfair to put the responsibility for your mental health on an unsuspecting audience, often of strangers. Writing is solitary, but performance requires an audience – you have to give something back to them, because without them you’re just someone reading their poems to an empty room. Keep them in mind when you write a piece you mean to perform.

Can you talk about the relationship you have with writing and performance peers, in terms of support, critique, feedback, inspiration and community?

Peer feedback and critique is critical for growth as an artist. I wouldn’t be the poet I am without the people who took time to read, listen, watch, and tell me what I could be doing better. Fellow poets and performers will ask you the hard questions about your work that you don’t want to ask yourself, but have to if you want to grow. Having a community of peers is a blessing, and not everyone has access to a goldmine of learning like that.

Could you tell us about a stand-out moment in your work (good, bad or anything else) – something that you look back now and see as a kind of catalyst, turning point or formative moment?

Honestly, I think there are three. For the first, Amanda Anastasi asked me to perform at La Mama Poetica back in 2016, and the theatre was set up in the round. I had the set ready, but I wasn’t sure which direction to face, and no microphone was necessary – so I went nuts. Ran around, danced, shimmied, lay on the floor, everything – I wanted to use as much of that space as possible, and I was given free run of it without a microphone. It was the most active performance I’ve ever done, and it was exhilarating; it felt like the most life I’ve ever given my poems.

The second, obviously, would be the Australian Poetry Slam. It’s one of the most accessible ways to kickstart a career as a performance poet, between the massive international tour and the book deal, and the opportunities they’re offering keep growing every year.

The third, I would say, was Voices in the Attic. It was the second open mic I had ever been to, but the feeling of community was infectious, and the promise of that heady rush of performing every two weeks threw my writing into high gear. I was writing two new poems every two weeks to keep up. Ebony Moncrief made a certain kind of magic happen with that gig, and I’m forever grateful my stint in Melbourne coincided with it.

Can you talk a little about living and moving across and between countries and cultures and across and in between forms and how this intersects with your writing and performance work?

As much as I genuinely love adventures, it’s hard to click into focus on generating new work. I’ve slowed down a lot on how much I write since I spend so much time in transit and on temporary visas. It does make me a lot more grateful for the moments of stillness and home, though, and it definitely shows in my work – I think I’ve written about two poems in the last month concerning wooden spoons and how cooking brings together found families.

What can people expect from your workshop?

I stumbled across a great ideas generation exercise when I was working for Writers in the Schools Houston, and I’ve modified it for a workshop setting. There will be a significant writing portion that culminates in some brutal editing techniques that work wonders for tightening writing, and once people have a working draft they’re happy with, we’ll do some peer feedback on performance techniques.

Arielle Cottingham features at the Opening Night of The Melbourne Spoken Word & Poetry Festival, as well as hosts Write Here, Write Now, the Fresh Voices workshop and competes with Team World at the National Poetry Slam Australia. You can find out about all of those events at The Melbourne Spoken Word & Poetry Festival website. 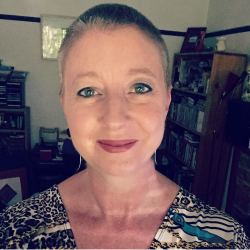