Aside from some notable exceptions, the chapbook or the page collection is the preferred artifact or published item for the performance poet around Melbourne, at least in the last few years. The book trumps the spoken word album in terms of its popularity. It’s rare then that you can point to someone who’s released enough albums to justify a ‘Best Of’ album. It’s not too hard to guess that that person is none other than Steve Smart. 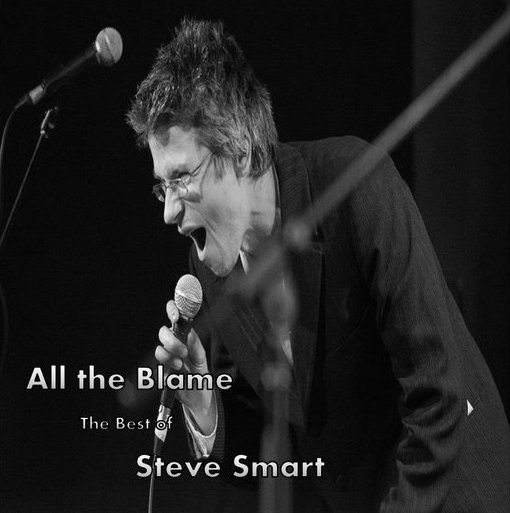 Steve Smart’s poetic antics and ridiculously deep body of work has become a staple of the Melbourne poetry scene for as long as I’ve been involved. Still I go to open mics, or see him do a set somewhere and in there there’s not just new pieces but also old pieces I just haven’t heard yet. Amongst that, there are pieces that I can’t get out of my head. Pieces I rave about to friends like that poem about ‘fucking poets’ or the love poem for smokers, and here, they come to life and feature in All the Blame – the best of Steve Smart.

Launched at Passionate Tongues a few months back, All the Blame features twenty poems, many from his previous albums, and including four previously unreleased tracks. With musical textures from George FoH (O’Hara) and a bunch of others, many of the pieces take on a new life. Most are lovely reminders of the time you heard him do the pieces live.

For me, there are two standout pieces. I admit they were probably going to be the standout pieces before I even heard the ‘Best Of’ album. I may have asked for them to be in there.

The first, ‘Girl on Fire,’ is a love poem about preferring to date girls who smoke. I don’t even smoke and I get the pang of feelings from that piece, when he nears to end of the poem and says “I’ll roll for you my darling…flick the ash off your skirt.” It demonstrates Steve Smart’s ability to twist tropes, turn them on their head, he always manages to find something new to say.

The other piece is the piece I fanboy over, ‘The Turning,’ always a piece for poets who’ve just got passed that honeymoon phase of being a poet. If anyone ever asks what my Melbourne influences are, I’ll probably point to this piece as a marker of me trying my hand at absurdist or harsh wit. “I wanna be a truck driver,” he says, “shit, I wanna be a truck, big wheels smashing down the highway…” before flipping too “I wanna play golf. Professionally.”

It also features the piece he won the inaugural Melbourne Spoken Word Prize last year with, a more serious ode to poets and why we do what we do. In that, he reminds us that one of the things people love about Steve Smart is how he can go from the weird and hilarious pieces into something poignant in one set, even one poem. In the live recording from the prize night, he ends with “Satisfaction at being good for poetry, not just having poetry be good for me.”

In All the Blame, he manages to show his breadth in tone and theme, without giving us everything. Toward the end, he gives us ‘City Loop’ from the Loop City album with Amanda Anastasi, with violin by Sarah Curro and composed by Yvette Audain, and just one track, leaving us crumbs to go out and explore what else he has to offer in what I imagine is some giant attic full of poems.

All the Blame – the best of Steve Smart can be purchased and downloaded off his BandCamp page or physical copies from Steve Smart in person.