Melbourne Spoken Word’s Benjamin Solah checked in on the controversial Randall Stephens as he begins the toughest leg of his cycling and poetry tour, riding across the big expanse of desert in the middle of Australia.

So you’re riding across the Nullarbor on a bicycle, tell us when and why you decided to do this? 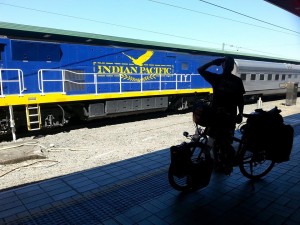 The idea came to mind mid-2010, during my first poetry tour over here in WA. I was talking to a local Perth poet after a gig who’d just come back from cycling throughout Europe, and what an amazing time she had had doing that. I’d flown over to Perth and felt very little sense geographically of where I was, I mean considering Perth was touted as the world’s most isolated capital city. I thought a follow-up trip that involved going coast-to-coast on a bicycle would make for great experiences in getting to know and understand Australia, which was becoming more important to me, after having done a big bought of overseas travel.

But you know there’s never a singular reason for doing anything, there’s lots of whys wrapped around this. Partly to shake up my somewhat stagnant urban work-a-day lifestyle. Partly to (force myself to) get into better physical and mental shape. To have the life experience, and hence interesting things to write about in the future. But the forefront reason is to inspire other Haemophiliacs (and by extension, anyone suffering under limitations on her or his health) to attempt something that defies those limitations. So in conversation with our national Haemophilia organisation, I decided it was worth attaching a fundraising effort too. But also… yeah I just thought it would be fun. Life’s short, get some kicks.

That’s great, but what does this have to do with poetry? 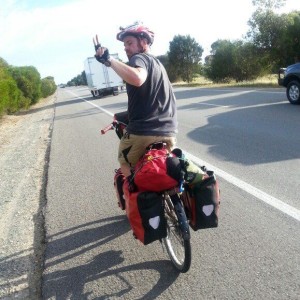 Well, the very first poem I ever wrote was about my bicycle, so poetry and cycling have always had been inextricably linked for me. However, in less tangible/quantifiable terms I thought the best thing I could do for my poetry at this point was stop doing it for a while. I think I’d gotten to the point in Melbourne where my writing was really reacting to reactions to what I was writing, or venting, or attempts at caricature of masculine ideals, and I’ve been feeling very burnt out.

As you know I’ve caused controversy at times in some circles, a lot of it came down to misinterpretations of what I was presenting (in terms of typical heteronormative male attitudes) and looking back at this, I question myself what was really achieved. Not to disavow anything I’ve said or done, it’s all part of a continuing journey to find my voice and better articulate my concerns in life, but certainly now I wouldn’t be writing what I did a few years ago, and I have quietly retired a few performance pieces that no longer speak (no pun intended) to me.

So yeah with all that it seemed like a good time to go do something else worth writing about, y’know? Get back to what started me as a poet those seven or eight years ago, that is writing as a bi-product of the living you do, as opposed to what you’re living to-do. My mantra used to be “you can’t be half a poet” later it became “you can’t be just a poet” now I feel like you need to have, or to get, personal/life experiences worth writing about. I think I lost that along the way, in the last few years becoming more interested in characterisation and satire, as performance. An intellectual game that I know for a fact not everyone followed along with, or shared any interest in.

This trip is about gathering material for later use, keeping up an online journal (through the Facebook page), and I’m really enjoying this style of writing, an ongoing stream of consciousness, not wrapped up in any of the stylistic/performative trappings I’ve used for so many years. I just… say what I’m thinking. I know that sounds obvious, but for me it’s been a big deal trying to get to that place of pure expression.

But you’ve been performing too, right? Tell us a little bit about the poetry tour? 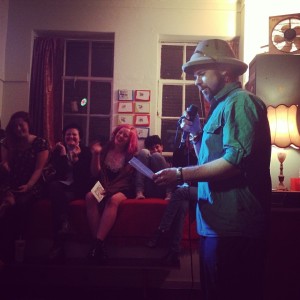 Oh yes, of course. For better or worse (and probably contradicting everything I’ve just said haha) any time I go travelling now has to involve poetry somehow, either writing it or performing while I’m away – it’s too much a part of me to neglect.

There was no way that I could go through the six or seven cities on this route (Brisbane, Newcastle, Sydney, Wollongong, Adelaide, Perth, Fremantle) and not do at least some performing. Over the years I’ve made friends with lots of poets around Australia, and in some cases it was as much about dropping in to see them as getting feature spots.

Even though the logistics were difficult to organise on east coast… making sure that the dates I was performing were far enough apart that I could definitely cover the distance between destinations on my bicycle. Ultimately, I love performing for an audience, and it’s too much fun to miss out on.

On that note, any tips for poets thinking of touring in other cities?

Yeah, in terms of dos-and-don’ts there’s lots of advice to give. First of all you’ve got to be brave, inasmuch as not being afraid to ask for things, and secondly you need to have lots of patience and tempered expectations of what you’ll find in other states.

All the touring I’ve done has been completely DIY, no one organising any solo or supported gigs on my behalf, no agents or anyone one helping out with publicity or admin or sponsorship etcetera, it’s just been a matter of meeting people as they came through Melbourne, or being introduced to friends of friends.

I started touring as a double act with Steve Smart in 2009/10, he was already a fifteen year veteran of this stuff, the couch surfing, the late night buses, getting a few hours sleep at train stations, and he introduced me to a lot of great people. So he helped ease me into that world and on stage he and I played off each other really well as a double act. I was Kirk to his Spock, or the other way around.

So yeah, it helps to have someone to go with, who’ll hand-hold you and show you around. It helps to have merchandise to sell, both because it makes you more attractive as a feature and it shows people that your work is to be taken seriously enough, that you believe it’s worth paying for.

Do your homework… Facebook is invaluable like that, for finding out what and where the poetry gigs are, and who you may already know. Tell anyone and everyone what your plans are, because they might be able to help, or know someone else who can.

A big one (maybe the most important thing, actually) is when you’re contacting poetry conveners interstate, give them plenty of notice. It’s no good writing to someone saying “hey I’m going to be in Brisbane next Friday, can I have a gig, please?” Most poetry gigs worth their salt organise a few months ahead, and maybe they’ll have some wiggle-room, but really I think people deserve at least three or four months’ notice, if you want to find a good feature somewhere.

Wow… you know now that we’re talking this could be a whole other article. I mean I’m only talking about the small-time grass roots stuff that I’ve done. It’s a different thing again if you’re part of a festival or putting on your own book launches, fringe festival shows, doing workshops etcetera. That’s outside my experience, for the most part.

Yeah big topic that, so you mentioned before a fundraiser you’ve attached to the bike ride?

Oh yeah, it’s for the Haemophilia Foundation Australia (HFA) to contribute towards social programmes to help people with bleeding disorders, in terms of education, advocacy, material aid and international aid in developing countries too.

Thanks Randall. If you’d like more info or to contribute a small donation to the fund, check out his fundraising page.