When I received Australia Council ArtStart funding, and set out to create short films of my poem, I had no idea how they would turn out. The only videos I had ever made of my poetry was putting a camera in front of myself and performing how I would on stage.

It was a struggle finding a co-director to work with. I have pretty strong views about my art but in reality (contrary to my art!) I can be really shy and hesitant to express my opinions in a group setting. I had a few directors I tried to work with, but each time I didn’t feel they understood my direction and I didn’t feel confident enough to speak my mind. Directors like to control and I am also a controller when it comes to my art.

I had been acquaintances with Nathan Little before it was suggested to me that he could possibly be ‘the one’. Nathan and I clicked instantly and my ideas, which were only seeds, began to flourish and evolve. For the first time I could see my films as cinematic, taking on lives of their own. Performing a poem in front of a camera is one thing, creating a story out of a poem is another. Sometimes I was stuck, and I didn’t know where the next scene should go, and Nathan put forward ideas which expressed exactly what I was feeling but i didn’t know how to articulate. Nathan and I were essentially a creative team, and there is no way the films would have turned out how they did without his creative input. Finding the right people to work with is a key element in creating your art to the standard you want it to be. 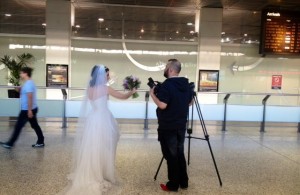 During the production stage, I sent some rough cuts to Profile talent management who were instantly interested in signing me. Their clients consist mainly of high profile celebrities, your Neighbours and Home and Away people as well as radio personalities. When I got signed with Profile I realised that if a mainstream management company was interested in me – in poetry – as something which could possibly be taken to the mainstream, I was onto something.

What interested me the most about creating the films was not only creating a story-line with the visuals but also the ‘acting’ of a poem. I see this as different to ‘performing’ the poem. This is where the poet actually acts like they would in a film. The visuals can be acting out the words of the poem, or in other cases they can be showing deeper meanings to the poem which a poet cannot possibly show when they are performing a poem on stage. This ’embodiment’ of the poem, which a poet would do on stage, is taken to the next level. Essentially the poem is packaged in a way where it can be delivered to the audience from the comfort of their home via YouTube or via a Cinema Screen or Television. These films can also be embedded within an ebook, or, as I did in my 2013 La Mama Explorations show, Good Greek Girl (which will have a premier season is 2015), can be incorporated into a performance of show, where the poet is interacting with their poem. As poets, we all know that when we write a poem, we grow out of it and move on. I was interested in the dialogue between the old poet (in the film) and the new poet (performing). I took the films one step further creating a film trailer for my current book, Love and F**k Poems, using footage from two of the poems from the book, ‘Best Friend’ and ‘How to get a f**k’

I was also interested in the idea of working with other poets and writers but not just because I wanted to work with them, but creatively I liked the idea of putting well known poets and writers ‘inside my poems’. Performance poets can be very distinct characters so I liked the idea of playing around with this and seeing what they could bring to the films because I believe all performance poets can also act because it comes with being a performance poet. By doing this I was able to bring in the unique character traits of these poets into the films. I also invited some of the poets in the films to respond to the films on the launch night, as well as a few other poets. I want to create a dialogue of poetry between the films and other poets. I will also be responding to the films on the night with newer poetry I have written recently, addressing the poems of the films which were written a few years ago. Most of the poets are from a Greek-Australian backgrounds as I am interested in the cultural dialogue we can create with the films and the poems as a creative whole.

Everyone thinks poetry can’t sell, but I beg to differ, and I have always held the view that it can. In this digital age where less people are reading and more people want things fast and accessible, could poetry be the medium that pushes through?

Koraly Dimitriadis will launch her Good Greek Girl Film Project at Loop Bar on August 10th. She has also invited poets in the films and other poets to respond to the films.