People of the Sun is an intimate collaboration between spoken word poet Joel McKerrow and playwright Anna McGahan. It is a multifaceted poetic and theatrical exploration of the theme of lightness and darkness, and all the shades between.

At the surface layer, it imagines a post-apocalyptic world where the sun has long disappeared. It traces the lives of two central characters – Joel and Anna – as they struggle with the darkness that permeates Fluoro city and yearn to see more.

The lighting and timing of space are an immersive and powerful reminder of theme. To enter, the audience must first give up their deepest secret. Characters slowly emerge from the seams of darkness, offering clues to the fate that has befallen the city. The story then unfolds through a series of narrative pieces performed by McGahan and McKerrow. It is only after light has been revealed that some of these secrets are shared; the grip of their darkness thus broken.

Those familiar with McKerrow’s work will recognise the roaring crescendo that pierces through each of the narrative pieces. The sense of hope is there, as is the invitation for people to be and join something larger than themselves.

What is different is the duality in voice as the reigns of poetic creativity are now seamlessly held by two. The initial poetic narrations were developed by McGahan, with each scene subsequently improvised, devised, and revised by McGahan and McKerrow together.

The end outcome of this process is as evocative as it is haunting; a testament to the mastery of the show’s creators of their respective disciplines. A delicate urgency and beautiful fragility permeates every word, action and sound. Although light and dark, seen and unseen, are repeated often, each utterance reveals a fresh, alternate concept for the audience to explore, react and attach meaning to.

This is the real brilliance of People of the Sun; to take the stories and experiences of two very gifted artists and transform them through collaboration into a cohesive and gripping narrative for audiences to remember for years to come.

Poets who play it safe and are protective of their words, take heed – People of the Sun is a powerful reminder of the explosive creativity that arises when improvisation meets collaboration. It is what happens when you turn off the lights, close the curtains, and under the covers of your doona, imagine a world of what ifs. 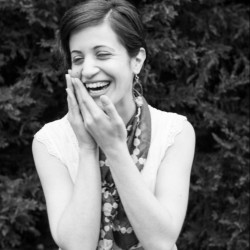 Farah Beaini
Farah Beaini is a Melbourne based writer and spoken word poet still learning to say 'yes and' to herself.