Technically, this website is meant to discuss poetry written by Melbourne poets, but Ken Arkind has been here enough so we can kind of adopt him. Plus, if he likes this review maybe he’ll jump on a plane and move here and we can smell his honey badger beard all the time and the poetry will be really great.

But in lieu of him not coming to Melbourne, I’ve always wanted a collection of Ken Arkind’s since seeing him perform here a few years back alongside a whole bunch of cool poets from The States. They all blew me away but especially Ken. Maybe there was something about this cadence and tone that reminded me of the poetry I was striving to write but just falling short of like making an awesome jump above a gorge and just missing and falling to my death. 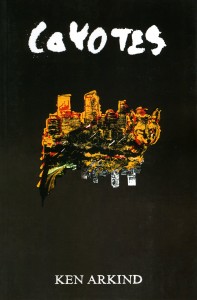 Coyotes contains a bunch of those first poems that got me hooked like ‘Maggie’ and ‘An Experiment in Noise.’ As you get to those pieces in the collection, they orient your reading, you read them with his voice in your head and add clarity to the new pieces. They are also just as strong yet different in how they’re read on the page. The way he plays around with the placing of the lines, sometimes shifting the font, goes someway to capturing the way it’s spoken. Like when it opens with ‘An Experiment in Noise,’ with lines like ‘Remember that refrain when the waves come. they will come‘.

But ‘David’ is clearly the standout piece. It’s the one that makes my insides stand in silence and it was an interesting experience when the lines ‘When I looked down the screen read, / I live you I live you I live you I live you‘ hit me like they always do. Usually, you can sit there as the lines collectively hit everyone around you and react naturally, but this time I sat on the tram, the passengers around with no real idea what I was reading, and I had to hold it all in, behind my sunglasses, but I really wanted to jump up and say to the whole carriage, ‘Listen to this! It makes you feel something.’

What is clear in Coyotes is Arkind’s particular accuracy with the contemporary image and metaphor, his ability to pluck something that fits his generation and deploy it with clarity. ‘Portland is Seattle’s know-it-all little sister / who went backpacking across Europe for a semester / and came back with an attitude.’ Some of them are particularly American, but not so much that you’re left totally confused. The metaphors from backstory and pop culture make the poetry accessible, but not in any cheap or easy way. His language is gritty, not with one arm tied behind his back, tied back by form or obscurity. Most of all its a great accompaniment to his performance work that Melbourne would be love to see again. 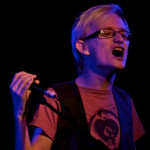 Benjamin Solah is the Director of Melbourne Spoken Word. He is also a spoken word artist from the western suburbs of Sydney, now calling Brunswick West home. He has performed at the National Gallery of Victoria, featured at Passionate Tongues, The Dan, among others. He released on EP with Santo Cazzati called Duel Power in 2012 and his chapbook broken bodies in 2013.