It is a wintry Melbourne night with light rain and we are gathered on the front lawn of a Coburg house late one evening. We are here for ‘immersive theatre, house party and good times’. We are grouped as we arrive as ‘family’ or ‘friends’. There is mulled wine, dhal and rice for the hungry, and an air of relaxed anticipation. A man in a Priest’s collar comes to welcome us to the ‘wake’ of a dear departed young friend. It is director Scott Wings. 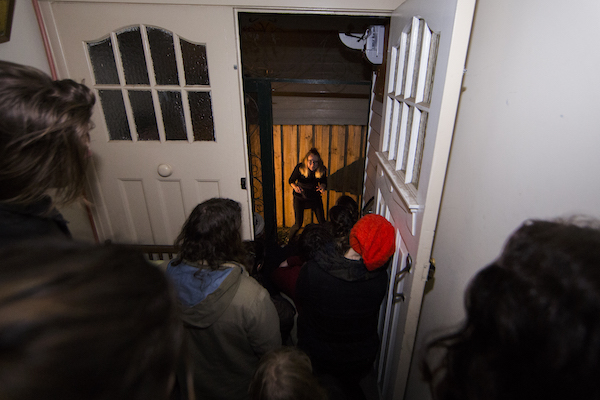 We are led towards the back of the property, the path lined by the cast all dressed in black and bearing candles. They utter warm, mock-sombre words of welcome, ply us with tissues and usher us into the back yard where we gather around a brazier. We are welcomed by a man in loincloth and ochre, Indigenous performer Neil Morris, whose clap-sticks and language remind us lovingly where we are and on whose land we stand.

We ‘friends’ proceed to a series of acts in various chambers beginning with the mourning-room of the ‘Widow’ Mollie Yang, strewn thick with tissues and grief. We are bade ‘get out’, but we understand that these are the words of the inconsolable, so we stay with the Widow as her sorrows find expression.

There follow for us six spoken word performances by different artists in different, curated spaces, as our fellow audience members who are ‘Family’ concurrently experience a similar number of different shows.

Some are moving, some jarring, some endearing, or all three at once. All are carefully crafted and powerful in their own way, each created by an individual writer and incorporated into the show to form a more-or-less cohesive whole.

We ‘Friends’ are invited to pile into a bedroom and hear poet Arielle Cottingham’s shocking piece ’16 years’, which she reveals the appalling year-by-year public objectification experienced by a girl at the hands of anonymous men as she grows up. “I’m too young for this!”, the refrain. The sense of invasion-of-person is palpable. Cottingham reclaims power for all girls by revealing her adult truth.

Next, we are in another room decorated to create a sense of the infinite outside. Neil Morris recounts “The Dreaming”, and then we move on.

Sigrun Makula as “Valkyrie” regales us next, on a doorstep, with a passionate piece full of the drama and violence of her European heritage. She stabs us in the chest with a Viking spear and maniacal smile, full of the rage of all the ages.

Thence to the back yard again, to hear the mercurial Chalise Van Wyngaardt address her “Dear Muse” with the grace of an Elizabethan playwright. She is under a Hills Hoist pegged with first drafts instead of clothes. Bedsheets become curtains in a theatre of suspended disbelief as Van Wyngaart waxes lyrical on the vicissitudes of creativity.

In our penultimate show Poet Esme Fong invites us into the kitchen (at parties) to deliver “In the Middle”, an evocation of the intolerable noise of modern life both as metaphor and as a pathological interior reality.

Finally Rikki Livermore’s reading of the will as the ‘Lawyer’ reminds us of the dear departed. Clearly tired of all the greed and materialism of the age, he bluntly dispenses the deceased’s worldly goods to the deserving among we ‘Friends’ assembled. Your reviewer gets squat, by the way.

At this point Family and Friends are reunited in the back yard where the Priest closes the show and opens the party.

Creative Director Scott Wings experiment in taking art ‘out of venues or institutions, and into your backyard’ attracted an open minded audience who really liked the show. Stuffy, conservative theatre this was not. This was no surprise, of course, coming from Scott Wings creator of the riotous Ruckus slam and of the recent powerhouse fringe show ‘Colossi’.

For me, Debris was a series of treats and surprises, and I think it succeeded in providing a new kind of container for theatre and spoken word performance.

We did not see all of the performers’ individual pieces. Besides those reviewed above there was Chloe Hodson-Smith ‘Crimson Fishbowl’, Lucy Buckley ‘Everything Inbetween’, William Beale ‘The Dreaming’, Madeleine Johnson ‘A Grimm End’, and Sophia Simmons ‘Brightness’. The latter, Simmons, fresh from her recent, remarkable, and most moving performance as the lead in the stage play “Deadheads”.

Debris certainly gathered a lot of talent in one house.

If I have one criticism of Debris, it is that I, we, did not get to see all of these acts within the show on this night. Perhaps I am greedy. Despite the Lawyer, however, I didn’t go home empty handed because what I did see was memorable. Besides, do they not say it is good to leave an audience always wanting more? Debris surely achieved that.

And our imaginary friend had a very warm and theatrical send-off.

Rowan White
Rowan White is an Anglo-Melbournian poet, spoken word performer, singer, activist, counselor, driving instructor and sometime disability support worker. Rowan's writing explores themes such as the beautiful here and now and the problem of privilege. His style is personal and polemical, with a touch of dag. He likes peanut butter and jam on his toast every other morning. His favorite word in the universe is 'glockenspiel'. Rowan's first book is 'Tailwind and other poems', published in 2015.