There are moments, as a reviewer, when I realise that I can’t hide behind objectivity. That I use words too often to assuage my guilty (post?) colonialist middle class white consumer privilege. Because I need you to know that I’m a Good Person, sensitive and not the demon oppressor at all. I’m not bad. I’m not. I’m…’ Sometimes you have to take one on the chin and admit that this is about all of us, so I won’t hide behind objectivity to imply that I’m somehow outside the collective problem.

One of the dominant themes I took from Real Fake White Dirt is that Colonialism doesn’t end because ‘We didn’t didn’t do it’. And as a half Aussie half NZer, this show hit me right in the guts. As 2nd generation Kiwi, it’s easy to fall for the myth that we’ve left behind some kind of utopia of racial harmony and that it’s only Australia that has a toxic relationship with our first people. It isn’t true. They’re doing better than we are, but that shouldn’t take the foot off the head of colonialism.

Jess Holly Bates is fearless in dumping herself and her audience right through the looking glass if everything we hope not to be. She’s asking questions without presuming to give answers and the show never feels like proselytizing. There’s humour too, which is perhaps the hardest aspect of the show to pull off. It’s not a subject that lends to the comedic with ease but Jess pulls it off with a natural warmth and a strong physical presence and assured verse. The play is a mixture of poetry and theatrical monologue.

There’s a telephone at centre stage that keeps ringing to both break the tension and increase it, depending on the moment. Jess talks to her director as though he was not present, keeping him updated on the progress of the show, which bits she’s added or cut. He’s not always impressed and the relationship becomes progressively more strained. This is particularly intriguing since we know that the director is in the room, and we never actually hear his voice, it’s always a one sided conversation.

The show moves between adult Jess, child Jess and the various characters that populate the play. Each of these character is given a rhyming mnemonic device, which goes from cute to pointed as the play goes on. The characters and their relationships to the dirt represent aspects of Pakeha (white) NZ and the efforts people go to in assuaging their own guilt, making the world ‘better’ on an individual level. Jess doesn’t call bullshit on any of these efforts exactly, more she aims a microscope at them to better see motivation and result, or lack of. The child Jess sections are particularly affecting. The writer never stoops to being cloying or sentimental, there is a power in remembering and giving voice to the child we will always be.

The set is minimal, to the credit of director Geoff Pinfield. A plinth, a jar of Aoteroa dirt, the hidden phone. And a circle of fake grass. All metaphors, sharp and succinct. The performer moves through the stage space with a balletic grace; muscular and balanced. It’s a physical performance without ever feeling like the text is being overwhelmed. Keeping in mind that Fake White Grass is based in Jess’ university thesis, that density of text balancing with and never against a theatrical landscape so evocative and constantly moving… it really is an achievement worth celebrating. I also appreciated that the ending was a quiet, poetic note when I expected more of a Big Finish. That shows a commitment to the text and the subject that deserves recognition.

If there were a gripe, I was told after the show that amplification would have been a help to those with hearing difficulties – some of the quiet bits were tricky. The Guild Theatre is quite a large space for a one person show and sound can get lost. Also, the audience seemed unsure of how much to participate when it seemed liked direct questions were being asked of them. That is not actually a criticism of Jess as a performer, or of the writing/direction. She introduced the show with an audience call and response (about half the crowd responded), so the precedent was set early. She also interacted with late comers, further solidifying the idea that this was at least in part a participation friendly show. I think it comes down more to the nervousness of an audience dealing with difficult subject matter; we weren’t up to being raucous – well, except for one brave beautiful soul who had a crack midway through the show.

Sadly, this may have been the final performance of Real Fake White Dirt, Jess is moving on with other projects such as The Offensive Nipple Show (coming to Melbourne for Fringe 2016) and Geoff is retiring from the theatre. If you didn’t see it, I recommend ordering the poetry book of the same name, fake grass on the cover and all. And don’t miss Jess Holly Bates when she comes back in September. In the meantime, check out her YouTube page, I really think she’ll knock your socks right off. 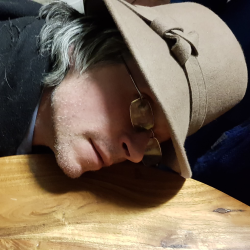