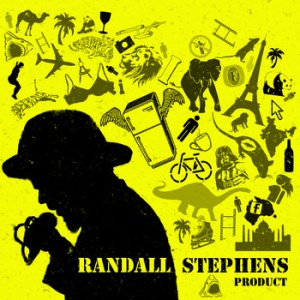 Scanning your eye over the cover of Randall Stephen’s CD Product, the first thing you notice (apart from a silhouette of the safari-hatted poet himself) is an elephant, a bra, Darth Vader, the Taj Mahal, a flying fridge… One thing you sense, the moment your eye stops on the flying fridge, is that this ain’t gonna be boring!

The album begins with a short fanfare-like intro, complete with applause, snippets of MCs introducing Randall, more applause…then the energetic burst that is Man Alive, one of the many live recordings on the album. Let me put it this way: if you’re feeling flat or unmotivated, this track is the equivalent of a double shot espresso and a cold shower. There is an urgency and a call to seize the moment with lines like “Let it out because this will die!” There are lines that will make you chuckle: “I wanna fight the good fight with bad timing” and “I wanna be the ironman of irony!”

Brace yourself for Behemoth. The entire poem is a vocal expression of absolute power that opens with a monstrous growl. I know many eight-year-old boys who would go absolutely nuts for this, especially the line about producing “a tonne of shit every day…for millions of years.” Besides the entertainment value, there is something eerily confronting about the depiction of a creature that “has no natural predators.”

Randall duets with Alex Scott on more than one occasion: the interlude about our deceptive perceptions in Bigger Than You Are, the clever and topical The Future of Entertainment, the self (and peer)-deprecating You Fucking Poet and Saharan Siren Song. Saharan Siren Song is the most philosophical moment, and the most atmospheric. Among swirling desert sounds and the whispers of ‘step off’ is a poem about the desire to escape into a silent, tranquil vastness. Randall and Alex, with their contrasting vocal styles and combined wit, balance each other well.

The other collaboration on the album is with Steve Smart in Last Seen, which is a highlight. In Don’t Ask Why the coexistence of both the impoverished and wealthy India is effectively conveyed. We’ll Always Have Paris is another poem with a strong sense of place. Again the theme arises of catching the moment or opportunity before it vanishes, but with a softer tone, much aided by the piano accompaniment. Left Unsaid is yet another on this theme – the lost people, the lost chances.

In Jump, a poem about the initial infatuation stage of a relationship, the image of the flying fridge finally becomes relevant! I Statements is a strong moment on the album – check out the You Tube animated video of this. Darth Vader Died – My Dad is probably the most moving, intensely personal piece. The image of Randall seeing his face on a photo of his father is a powerful one.

Many of the poems have short track live intros and they work well, in that they show the banter and live interaction Randall has with his audience. It emphasizes his skill as a performance poet and keeps the whole thing relaxed and fun. There are four bonus tracks which, interestingly, are listed on the back. I guess Randall doesn’t want you to miss them! It includes a passionate ode to his bicycle and a track read by the wonderful Meaghan Bell. Throughout, the music by Andrew Horne and Jacky T is well done and fitting, never intruding on the words.

This is a poet that doesn’t take himself too seriously – even the title of the CD is tongue-in-cheek – but underlying the liveliness and wit is an emotional rawness and a surprising array of subjects and ideas explored. I must say, I really enjoyed this album – its fun, its clever, its passionate. Randall calls it as he sees it. One poet’s heart and soul jampacked into a little yellow product.

Randall Stephens Product can be listened to and purchased at http://randallstephens.bandcamp.com/