Zenobia Frost’s debut collection of poetry Salt and Bone bricks out a space for itself and builds from ideas that Brisbane as a place is not usually instantly linked to. Death, longing, love, the risks of being intelligently unconventional, the chafing of history, and the act of contemplative observation are very far outposts from the sunny, sporty, beachy, conservative town its official facades decry. Frost’s verse balloons and gasps with an overwhelming sensitivity and sighs out a fog of metaphor that cloaks only to reveal the harmony and fragility of human life. 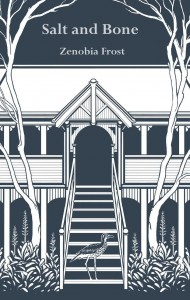 The Brisbane that Frost has conjured from the salt circle of her pages is not the Brisbane that you or I are likely to see unaided. It is one that has been stripped down to its skeleton and wholly examined. Salt and Bone, true to its title, is like an emotional autopsy, but not one in which the spirit seeks to escape the body. It is calculating, methodical, naked, and wholly beautiful. As a poet, Frost has placed its very heart in our warm palms, gifted us a twin city borne of her own capacity to see beauty through layers of history, regressive politics and meaning. And the sharp accessibility of Frost’s writing kindly lifts the veil for the rest of us to get a glimpse.

In Brisbane in Pictures (pp. 22-23), Frost floats short stanzas describing the inner-city after the floods in 2010-11, dredging powerful images of what was lost, changed or damaged from what was left behind, in both the massive:

and in the short, quick shocks of returning to the devastation of (un)familiar mundanity:

“…from the oven,
a second flood
of unscaled fish…”

“…a wheelie bin
trapezes from a power line…”

Also included in this collection is The Hobby (pp. 4-5), which won second prize in the John Marsden Prize for Young Australian Writers. Frost delicately explores the fine line between grave robbing, exhumation, archaeology and obsession in this poem, which she dedicates to Anatoly Moskvin, a cemetery enthusiast of an entirely different kind.:

yet with one bag of much loved bones
you find me, and you call me mad”

The themes of residue, archaeology, history and narrative are ones that Frost investigates in both a wider context and in a more personal one. In Archaeology (pp. 6-7) she compares two kinds of being studied, one post-mortem, desiccated and academic, with another kind, being stripped back and admired by a lover. The similarities are both moving and uncanny.

One of Frost’s strengths as a writer is that she has found a vocabulary for what some may label as morbid, without being maudlin or over-indulgent. Her observations are exquisitely described, and remain as capsules of tender moments, a tantalising meta-history of personal moments that whisper their place in a much wider world. She has a brave and exciting voice, and it is no wonder that her first collection was shortlisted for the 2013 Thomas Shapcott Prize.

I would recommend Salt and Bone to poetry lovers both far from, and within Brisbane, as while it does evoke a very particular Brisbane tone, it does so in a manner and context that can be admired from anywhere. Personally, as a Brisbane ex-pat, I found myself moved by a strange familiarity haunting these poems. The descriptions of the city, suburbs and sense of place itself was true enough, but Frost, with a rare and fresh talent has resurrected an entirely different vision – one that hit me with waves of deja vu for a site/sight I felt melancholy for missing before. Be aware, this is no tourist brochure. Salt and Bone reads more like a grimoire written in saliva by the tongue of reverent memory, ancient schematics drawn in ash threatened by a sudden wind, or a epitaph, like the one so fittingly outlined by Frost herself in Arrivals/Departures (pp. 49-50):

“In some languages, hello
is the same as goodbye”

However, I certainly hope that we won’t be saying goodbye to Frost’s vibrant writing talent anytime soon. I believe Salt and Bone is an achievement that marks the beginning of what is sure to be a bright and shining future bibliography.

Salt and Bone by Zenobia Frost in published by Walleah Press where’s available online for $20. The book will be launched in Melbourne on Tuesday, October 7 @ 6pm at Hare Hole, 63 Johnston Street, Fitzroy.