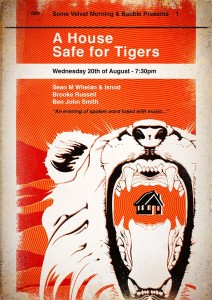 A new bi-monthly spoken word gig is set to hit Melbourne curated by none other than Sean M Whelan. A House Safe for Tigers was announced on his Facebook page with a stunning poster which describes the event as “an evening of spoken word fused with music…” with the premise that it will only feature writers collaborating with musicians, and not just poets either, but other writers including those writing non-fiction.

The first line-up, set to take place on Wednesday, August 20, 7.30pm, includes Sean M Whelan himself with his band Isnod, as well as Brooke Russell and Ben John Smith. With no open mic section, there’s plenty of room for the features to strut their stuff in a pretty polished event. Put this one in your diary.

Sean M Whelan is a name familiar to most people interested in spoken word in Melbourne, and with the old Babble slam added as one of the presenters, we hope this one will regularly pull a crowd. Some Velvet Morning, previously Dexter’s, is an intimate venue in Clifton Hill that is dying for more spoken word.