Amanda Anastasi talks to Andy Jackson about The Thin Bridge

A bridge is an object that connects and provides passage, and you have combined it with a term that denotes fragility and perhaps constraint. What does the image of “the thin bridge” represent for you? 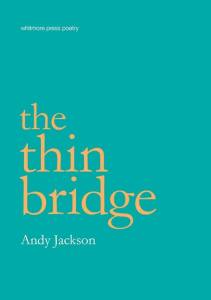 Fragility, constraint and connection are exactly the sort of things I’m trying to capture with “the thin bridge”. The title of the book is the last line of one of the poems, and it’s a literal thin bridge, but of course, it’s also a metaphor. I’m thinking of that visceral sense of risk, anticipation and uncertainty which you feel in your bowels when you cross a bridge over a deep ravine or river. The bridge for me is poetry, but also our own bodies – a link between the way things are and the way things could be. A thin bridge is small, intimate and its success isn’t guaranteed.

The title to me seems fitting as your poetry is also so finely crafted. One of my favourite poems in the book is Elephant. What is the great ‘elephant in the room’ for you (individually/personally or collectively for us as a society)?

It feels like collectively there are many – the situation of indigenous people, the plight of refugees, the marginalisation of people with various (visible and invisible) disabilities. Sure, they may not seem like “elephants in the room” because there’s a lot of talk going on. But I’m not sure we really know what these imposing presences really are or mean. As in the poem, we’ve adapted to the presence and to our own silence. Perhaps we’re just holding the trunk and thinking it’s a snake (to paraphrase a Buddhist parable).

When do you know the sculpting of a poem is complete?

Ooh, tricky question. I think it’s when that slight wince I feel in my forehead whenever I read the poem has disappeared. Of course, sometimes I’m wrong, and I realise months or years later that there are things I could change. The editing process these days for me is shorter than it used to be. Perhaps I’m getting better at getting it down, translating that weird poetic impulse into language, but it’s probably more that I’m more comfortable with a poem that has space in it, that’s a bit wonky, a bit “unfinished”.

In Two Portraits, No Black Rectangle, you quote Hugo Williams: “Given that poems themselves are metaphors, I find overt metaphors more and more embarrassing in poems.” In your opinion, how does a poet guard against the overly conscious metaphor?

Ironically, probably by not “guarding against it”. The best metaphors are intuitive and strange. We write them without quite thinking. They can even be clichés or overly conscious. They just need to come out of your own particularity, whatever that is, whether you know what that is or not.

Name the poetry collection that you have kept returning to.

Adrienne Rich’s “The Fact of a Doorframe” and Sylvia Plath’s “Collected Poems”. Yes, I know, I’m cheating – not only have I picked two books, but they’re both multiple (selected and collected).

I really want to come up with a splendid, rare word, but there are too many. I’ve noticed recently that I say (and write) “interesting…” quite a lot, so that must be a favourite. Including the ellipses – they’re important too. And “ellipses” is also a pretty delicious word…

Another thin bridge trying to be here.

The Thin Bridge by Andy Jackson (Whitmore Press) is available online from whitmorepress.com and from Collected Works Bookshop (Nicholas Bldg, 1st floor, 37 Swanston St, Melbourne). It is a limited print-run of 200, each numbered and signed.