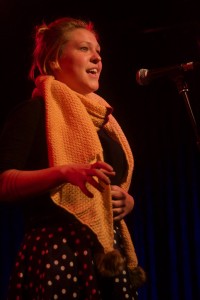 I guess for me I memorise as I write. I dont really write a piece and then sit down and edit it for ages. Instead I just memorise the piece line by line. If I feel like it’s a good line I’ll make the effort to remember it. If it’s a weak line I usually forget it pretty soon. It’s a sort of self editing as I go process. Apart from that, I practice pieces when I’m home alone in the mirror, or while I’m riding my bike home from work. This probably makes me look pretty crazy, but I guess thats just the life of an artist. The first piece I ever wrote took me a really long time to remember, but it seems to be getting easier. I also find if I have a strong emotional connection to what I’m writing, then Im more likely to remember it. 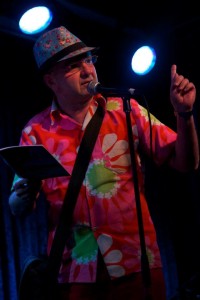 When I was a concert pianist, I memorised for performance dozens of hours of highly complex piano music. And yet I can hardly remember more than about a line of my performance poetry without the text in front of me. I never tried to memorise spoken word, I might do all right if I practised. Thing is, I see no need. I believe what I do is aural, apart maybe from my garishly colourful clothes and my similarly garish hand gestures. As far as I am concerned, it wouldn’t matter if I performed upside down with a finger plugged into an inappropriate orifice, what really matters is the SOUND. More genuinely THEATRICAL performers, however, do need to memorise so that they are able to make full use of movement and staging as part of their aesthetic. 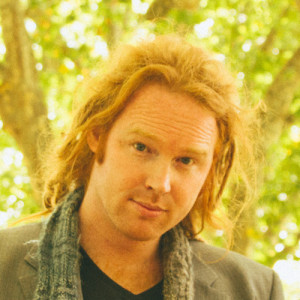 I am the crazy weirdo you see when driving who is in their car yelling at nobody. This is where I do all my memorising. As I am driving. Flailing my hands around and going over my poem out loud. I take a stanza and go over it again and again and then the next stanza and the next and then memorise the connections between them. I find that this process becomes another level of editting for me. The out-loud repetition helps me find and sink into the rhythm of the poem so much better. And I tend to cut certain lines and words that aren’t working, but I don;t realise they aren’t working until I am repeating it over and over.

I would say that memorising enables me to be fully present to the poem. For as I memorise it becomes a form of muscle memory, tongue memory. I don’t need to think about what the next line is, it just appears on the tip of my tongue. Like dances when they have memorised their routines. It is the same. This lets me sit back in the poem. To tap into the heart of it. To be present to the emotion of it. Not having to worry about what the next line might be. I can fully embody the piece to the point where I let go of everything but the poem and the audience and an authentic performance of that piece. 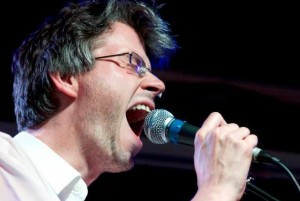 I don’t worry too much about it, I’m pretty comfortable with the page. My experience has been that if you do it right, the audience often doesn’t notice the paper anyway. If a poem stays in my regular set for long enough I’ll realise I’ve performed it so many times that I’ve basically memorised it anyway. Then it’s just a little bit of work to make sure it’s all there.

For particular performances (as Santo mentioned earlier) if I want to do a more physical/theatrical performance and feel that the page will hamper that, I’ll memorise poems then. If it involves any sort of choreography I certainly will. Just reading them over and over and over and over, making sure each verse is solidly drummed into my head; also recording the poem and listening to it on repeat for days. Even then I like to have the page with me the first time I perform a newly memorised poem to avoid embarrasing incidents. There are poems of mine that my partner remembers as well as I do, just from having me walking round the house repeating them aloud relentlessly before a show.

I do feel that having a a certain amount of poems memorised means you always have a back-up. If the printer’s not working, if I’ve left the house with the wrong pile of poems, if the gig is a random and I just get dragged onto stage with no prep (that happens occasionally), or if the set is just not clicking with the audience for some reason and I need to switch it up… I’ve always got at least ten poems I can rely on. 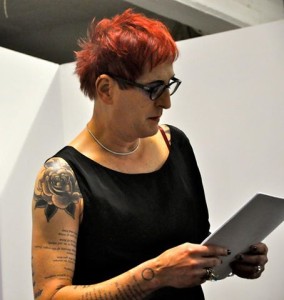 Steve Smart is right there is nothing wrong with reading from a page as long as we have something to say, something that is relevant, and relevant to all of us. But here are Kylie “tips.”
A. Someone once said to her “there are 3 rules of memorising: 1. repetition. 2. repetition. 3. repetition. And the most important one 4. repetition.”
B. Recording your words and playing on repeat even when falling asleep works for Kylie too
C. Take a walk or run and listen to recording or just recite. There is something amazing about that. It is like you walking your poem in, into yourself.
D. Perform in a front of the mirror, even if you don’t like your own refection.
E. Perform with the mic. We all love listening to our own voice. Well at least Kylie does.
F. Go to open mic and practice with the audience. Even if you make mistakes they will understand, or most likely they won’t even notice.
G. Practice in open spaces. Kylie loves reciting her poems on the steps of the parliament early in the morning in front of security cameras. By now all the police patrols know her.
PS. Do not practice your poem when driving as this may put you and others in danger.