The first time I encountered “I am a Dancer”, the first poem in Arielle Cottingham’s “The Tarantist’s Soapbox”, it was at an event that combined dance and spoken word. In an intimate performance space, her body exploded into “C4 and fireworks”, her “untamed Dominican curls” an extension of her dancer’s body, her voice folding passion into strength, anger into tenderness. I’ve never forgotten this visceral poetry-in-motion, and feel uniquely privileged to witness her unshackled from the microphone. 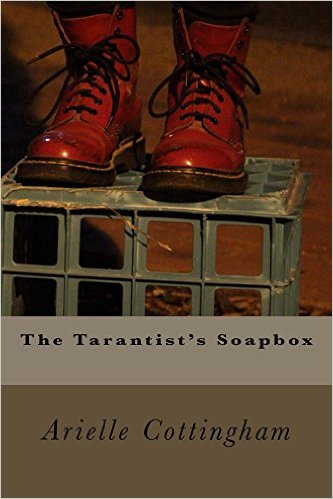 As a spoken word performer, Arielle’s artistry lies in fearlessly offering herself up to the audience. Watching her can almost feel like a ritual. Partly because she offers so much of her identity and heritage for scrutiny, partly because she is unabashed in presenting outrage, vulnerability and pain to the audience as both goad and catharsis. Her voice, views and physicality are larger than life and laid out for the audience’s full engagement.

On the page, this poet is every bit as intense. From the start, she reminds me again that she is a dancer, evokes her ancestors and the ghost of Amy Winehouse:

The resulting explosions rip my body down pathways paved with
sweat,
and drums,
and rhythm.
from “I am a Dancer”

In the very next poem, as she often does during spoken word performance, Ms Cottingham rips my political consciousness a new one:

When you turn on a TV,
you don’t have to look for a token to feel represented.
You have 9 Disney princesses.
Yo tengo cero.
from “For White People Who Think They Don’t Have White Privilege”

The intimacy of words on the page is most potent when Arielle is trying to wake us up to the horror of history. “Columbus Day” for example, unlike most poetry doesn’t hide graphic history behind metaphor. There’s a shock to realising that the atrocities committed in the name of Isabella and Ferdinand weave themselves so intimately through three separate strands of the poet’s ancestral heritage.

This poem
and this poet
may never have existed if not for them.
Descendants of both the Taino and the Sephardim
are many in my mother’s island.
Our existence justifies nothing.
our existence is a testament to their sins.
from “Columbus Day”

I challenge you to try and avert your eyes. I find I can’t.

Both “16 Years” and “Hints” have been performed as anti-harrassment anthems and I’ve cheered loudly at both. But with no room of rowdy, like-minded crowd to cheer into, the necessity of these poems is experienced as slow pain.

There is also a different kind of intimacy on offer in the volume of poetry. The playful exuberance of the historical love letter to Ray Bradbury, “Fortune Teller in 1953” doesn’t translate easily on stage. Nor the self-deprecating humour that spices her poetry:

Sometimes I think one’s reaction to poetry says more about the reader than the poet. So I’ll declare some of my favourite lines in this volume of poetry are from the rare and beautiful outright love poem:

The moon is waxing
and you are in the same sky
coming home to me,
gracefully touching down
in a meteor shaped like a metal whistle
upon my waking
from “Sunflowers”

But the intimacy of poetry on the page sings loudest in lines I’ve always adored the most in performance. Sitting here alone in the semi-dark, I can afford to be carried away by the musicality, depth, and passion:

I’m screaming with Jay Hawkins
I’m howlin’ with the Wolf
I’m listening to Etta James with the volume turned down low,
so only I can hear.
from “Irony”

Waffle Irongirl
Waffle Irongirl regularly sets out to write poetry in the venerable tradition of Dickenson and Whitman. But she keeps getting waylaid by strong opinions, her personal cultural context and a genuine fondness for the music of Cold Chisel.The fact she can’t resist the occasional slam just keeps things interesting. Off-stage she’s vague and freshly introverted.On-stage, she’s the poetical analogue of a heavy metal karaoke. You can find out more about Waffle Irongirl at www.waffleirongirl.com