Melbourne Spoken Word was founded on the 22nd of February 2012, by Benjamin Solah, as a website aiming to promote and discuss the Melbourne spoken word and poetry ‘scene’ or community, and become a central online space to list and advertise all of the spoken word gigs, open mics, slams, workshops and goings on around Melbourne.

Our focus is two-fold. We are a city-focussed organisation, focussing on what is happening in this city, and on the outskirts of Melbourne and we unashamedly focus on the spoken word, the readings, the performative. We list every gig in Melbourne that’s primary focus is spoken word or poetry.

We also publish discussion, news, reviews, interviews, history, video, opinion and debate, as well as produce a quarterly audio-journal Audacious, an album of spoken word. Melbourne Spoken Word is now more than just a website. We also endeavour to get out to gigs, help with cross-promotion and get out to festivals and markets to promote spoken word. 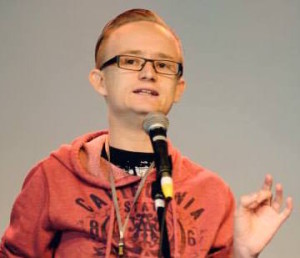 Benjamin Solah is the founder and Director of Melbourne Spoken Word, and the main editor of the website, Audacious and the curator of Melbourne Spoken Word events. He manages the ‘Upcoming Events’ page and sends out the Weekly Bulletin. He is also very busy and full of ideas but is slowly expanding the team to have more people help out, especially with skills he doesn’t have.